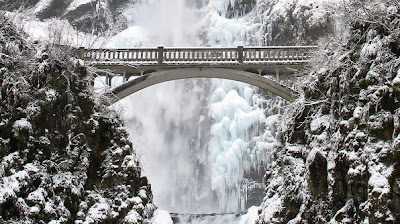 In yesterday's post I mentioned the ice storms that occasionally occur in the PDX (Portland) area. Here's an amusing story about one of those storms.

Some years ago we had a bitter ice storm one evening. We were gazing out the front window marveling at the shiny blacktop coated with ice, and the plants and trees that were being encrusted as the tiny slivers of ice fell. I noticed something very odd. A pickup truck parked in front of the uphill neighbor's seemed to be almost imperceptibly sliding down the hill. It was moving only a fraction of an inch at a time, but moving it was.

The pickup belonged to some new neighbors, who were so new we didn't have their phone number. But somehow we had to let them know that their vehicle was in trouble, and in a position to cause mayhem on our street.  Craig volunteered to go up the hill and across the street. But wait, there was an ice storm, so how was he going to get there?  It was impossible to walk, so he did the next best thing. He crawled up the hill. And across the street, and to their door.

By then the pickup's movements were more apparent and something had to be done before it careened down the hill. The resident got a long rope and crawled under the pickup, then tied the rope to the axle. He made his way back to the garage, and tied the other end to the heavy-duty garage door track. And that stopped the truck from sliding down the hill.

On a related note, not in the same winter, a downtown resident standing on his balcony caught the mayhem on the street after an ice storm.  This video is 4 minutes long--watch until the 2:45 point.


2 photographs of the beauty created by an ice storm; I stole these off the internet so they may or may not be taken locally, but the effect of ice is the same anywhere 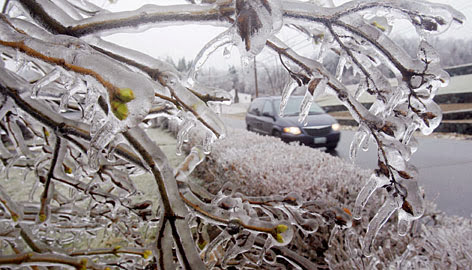 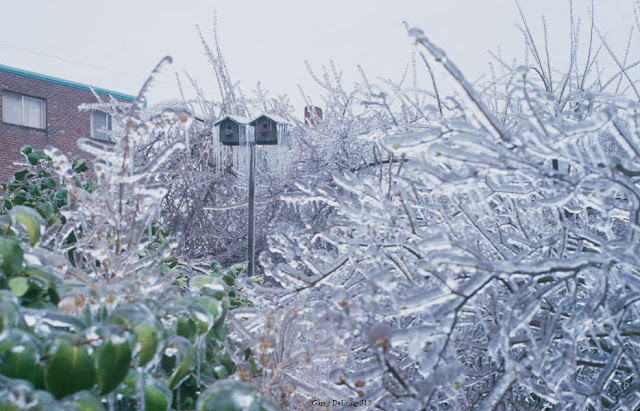