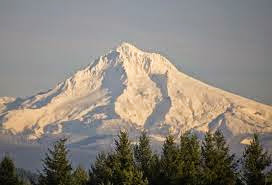 Mt. Hood. A glorious shining sentinel, Mt. Hood is the tallest peak in Oregon, reaching 11,249 feet. The Cascade chain of volcanos snakes from British Columbia on the north to northern California on the south. Mt. Hood is about halfway along the chain. Mt. Lassen and Mt. St. Helens are the only two that have erupted in recent memory, although Mt. Hood routinely puts out steam and produces clusters of tiny earthquakes.

Back in the day, Mt. Hood was a formidable obstacle to early-19th century pioneers who intended to make Oregon City or the Willamette Valley their home. Sliced with deep canyons and pitted glaciers, and strewn with enormous boulders in fields of slippery scree, no way could wooden wagons forge over its flanks and remain in one piece. Pioneers were forced to stop at The Dalles to build rafts to for a precarious journey down the Columbia and Willamette Rivers to their new settlements. That is, until Mr. Sam Barlow built a rough road across its southern flank in 1846. And then the rush to Western Oregon began. 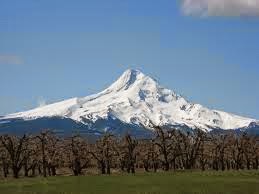 Now, thousands of climbers strive for Mt. Hood's summit every year. The typical climb involves departing from Timberline Lodge (6000 feet) around midnight and reaching the summit no later than 10 a.m., before softening snow begins releasing entrapped rotten rock. Plenty of climbers have been injured by rock hurtling downslope. Other dangers involve avalanches and mountain-generated storms that can swoop down on climbers in an instant.

This map shows the glaciers on Hood. Most have receded dramatically the past few decades, but they still carry the danger of crevasses that have contributed to climbing accidents and deaths.

When you look at Mt. Hood from a distance, you might think of it as a serene, friendly mountain and a great place for a rigorous but do-able hike to the summit. The photo below shows that not to be the case. A climber is faced with obstacles, one of which is the bergshrund, a large crevasse climbers must cross before reaching the summit (shown a bit lower than center of this photo). 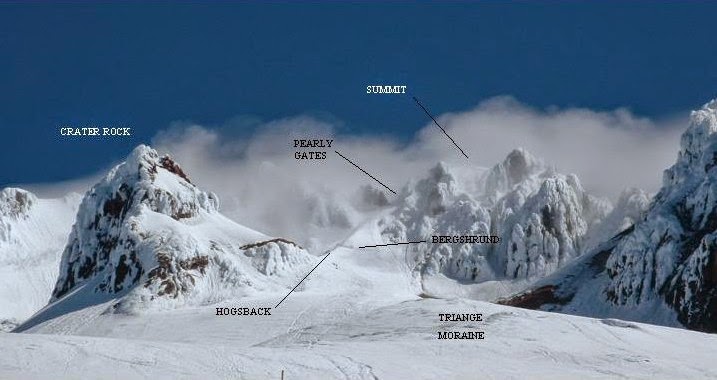 Accidents occur every climbing season, and frequently someone dies on Mt. Hood. Some of those are never found. The list below shows the fatalities that have occurred in recent memory. Another one occurred this morning (May 13) when a Catholic priest from New Jersey stood on the summit, not realizing he was standing on a cornice (a large pileup of snow that clings to a ridge and is suspended over thin air). He went right through it 1000 feet down, landing on Elliot Glacier. I guess you could say he was one of the lucky ones--his body was retrieved. Many are encased in ice somewhere on the slopes.

The worst accident ever was in 1986 when seven high school students and two of their teachers were caught in a 3-day storm on the mountain. Searchers risked their lives big-time to rescue them. They probed up and down the mountain in a gale-force whiteout to find the bodies. Two of the students lived; the rest froze to death.

The most dramatic accident was in 2002 when 3 separate climbing parties went sliding down the mountain and plunged at high speed into the bergshrund. Three were killed. The rescue helicopter lost its lift and it too plunged down the mountain (video below).

Other fatalities have involved a man who tried to snowboard down from the summit, a woman who looked over the edge of the summit and fell off, the Polish amateur climber who died on a quest to plant his country's flag on the summit, and the three men who climbed Hood in bitter December weather while training for an Everest climb. One was found dead in a snow cave and the other two have not been found.

This video shows the 2002 accident that killed three men who fell into the bergshrund, and then the dramatic helicopter accident (sorry, it's annoyingly overly dramatic) (and if it doesn't play google it on youtube):

NOTE: I have not included the multitude of skiing and snowboarding fatalities that have occurred at the ski resorts.

February 2018: climber stranded in storm on upper slopes of Hood. Six others rescued.

August 12 2014: A hiker was swept away when the Sandy River bridge gave way on the Ramona Falls Trail, during a flash flood (Brent A. Ludwig).
August 11, 2013 - Sebastian Kinasiewicz, 32, died while trying to summit the mountain alone when he plunged over a thousand feet at Cooper Spur.  He was a novice climber visiting the mountain while on a break from drone training in Oregon.

August 3, 2013: An ice tunnel collapsed on Collin Backowski.
June 30, 2013 - Kinley Adams, 59, of Salem, was found dead 8,400 feet up the mountain, a week after he attempted the summit. He was described as an experienced climber who had climbed many mountains.
June 14, 2012 - Mark Cartier, 56, an experienced and well-known local climber who'd climbed Mt. Hood a hundred times before, suffered a fatal fall near Crater Rock while descending the mountain.
February 6, 2012 - Jared Townsley, 32, of Tigard was found dead below Crater Rock after what was believed to have been a fall in icy conditions.

December 2009 - Reid Glacier: Luke T. Gullberg, 26, of Des Moines, Washington is found dead at the 9,000-feet level of Mt. Hood after a fall on the Reid Headwall. The bodies of Gullberg's two climbing  partners,  Katie Nolan and Anthony Vietti, were found the next summer.
January 2009 - Hogsback: Brooke Colvin, 31, is killed after being struck by falling ice in the area below the Pearly Gates and knocked several hundred feet down the mountain. She was climbing with her husband, 33-year-old Thad Stavn.
July 28, 2008 - Cooper Spur: Gary Lee, 55, is descending from the summit on the Cooper Spur route when he's struck by a falling rock. His body is located 1,000 feet below, just above the Elliot Glacier. Climbing w/ son.
December 2006: Cooper Spur: Kelly James, Brian Hall, and Jerry Cooke attempt to scale the difficult north side of the mountain and perish in a storm. James' body is later found in a snow cave near the summit. Hall and Cooke's bodies are not found.

June 2005: Climber fell 2000 feet at Cooper Spur (Todd R. Englehardt).
November 2004 - Sandy Glacier: Kenny D. Kasselder, 37, dies after falling into a crevasse about 30 feet deep on the Sandy Glacier on the west side.

August 2004: A backpacker was swept away while crossing the Sandy River on west slope of Mt. Hood (Sarah Bishop). Her 60-pound pack was securely strapped on; it is recommended that when crossing a river that pack straps be left loose.

May 13, 2004: Climber fell off summit's north side when a snow cornice collapsed, plunged 700 feet  (Rev. Robert J. Cornier).
March 6, 2003 - South Side: Fred Frauens, 49, leaves Timberline Lodge on a solo snowshoe hike up the south slope. He is last seen at 9,500 feet.
May 30, 2002 - South Side: Three groups of climbers -- nine people in all -- fall into a crevasse on the south slope. Rick Read, 48, and Bill Ward, 49, both of Forest Grove, and John Biggs, 62, of Windsor, Calif., die from the fall.
May 24, 2002 - Cooper Spur: Snowboarder Juancarlos Munoz, 30, attempts to snowboard from the summit but dies after falling 2,500 feet onto Eliot Glacier. Munoz, an Argentine, was living in Government Camp and working at Timberline Lodge.
September 2001: Karoly Janos Orsi, 26, a Hungarian exchange student, disappears on a solo day hike.
August 2001: Evan Clark, 15, of Hinsdale, Ill., dies after a chunk of ice crushes him near the Cloud Cap hiking area.
June 4, 2000 - Summit: Diana B. Kornet, 29, of Portland, who had reached the summit, slips as she looks over the mountain's northeast side and falls more than 2,500 feet to her death.
May 23, 1999 - Cooper Spur: Carey Cardon, 31, and Tena Cardon, 29, of Hillsboro, who reached the summit, die shortly after starting their descent, falling together about 1,500 feet along the northeast face. One of them slips and pulls the other as they descend the Cooper Spur route.
May 31, 1998 - West Crater Rim: Tom McGlinn, a 39-year-old climbing with a Mazamas climbing class, is buried and killed when snow and rock give way on the mountain's west side near Illumination Rock.
September 6, 1997 - Cooper Spur: Mark Fraas, 40, dies after falling 1,500 feet while climbing the Cooper Spur route on the northeast face.
September 1995 - Cathedral Ridge: Ken Budlong, 45, of Portland disappears on a solo climb via the Cathedral Ridge route in Hood River County.
July 1994 - Cooper Spur: Four climbers roped together fall 700 feet down the Cooper Spur route, stopping at the lip of a crevasse on Eliot Glacier. Ole Groupe, 16, of Pendleton and Jerry Milton, 51, of McMinnville die in the fall. The other climbers are rescued by helicopter.
July 18, 1991: John Pospisil III, 14, dies when he and his 12-year-old brother, Luke, lose control during an intentional slide and fall into a canyon while descending during a family outing. Luke Pospisil survives.
June 1990: The body of George W. Ott, 76, of Corvallis, is recovered from the face of Mount Hood after he dies of hypothermia. Ott's widow, Marian, says she did not expect her husband, who had terminal cancer, to return from the trip he had chosen to make by himself.
July 11, 1987 - South Side: Arthur Andersen Jr., 59, of Sherwood, dies when he and two other men fall into the Bergschrund crevasse.
May 13, 1986 - South Side: Seven students and two adults from Oregon Episcopal School freeze to death after being trapped in a whiteout while ascending. Killed are Tasha Amy, 15; Alison Litzenberger, 15; Richard Header,16; Erik Sandvik, 15; Susan Elizabeth McClave, 17; Patrick Francis Mcginness, 15; Erin O'Leary, 15; the Rev. Dr. Thomas Goman, 41, and Marion Horwell, 40.
June 20, 1982 - Leuthold Couloir: While in Leuthold Couloir a large avalanche came down from above and caught one rope team of three climbers. One climber was killed by the crushing action of this type of avalanche.
June 21, 1981 - Cooper Spur: Five people in a group of climbers die in a fall from Cooper Spur while descending. Killed on Mount Hood are Jim Darby, 35, Newberg; Garth Westcott, 35, Bend; Larry Young, 30, Corvallis; George Anderson, 36, Boring; and Leah Lorenson, 39, Vancouver.
June 6, 1981 - Cooper Spur: David H. Turple, 51, of Portland and Bill Pilkenton, 17, of Newberg die in a fall from Cooper Spur to Eliot Glacier.
April 26, 1975 - White River Canyon: A Mazamas mountaineering class attempted to cross White River Canyon and some were caught in an avalanche. One died.
June 20, 1959 - South Side: A group of Explorer Scouts were caught in a wet snow avalanche above the bergshrund and carried into it. One died
Posted by Suzanne Bubnash at 9:20 PM