A Life Lost in Service 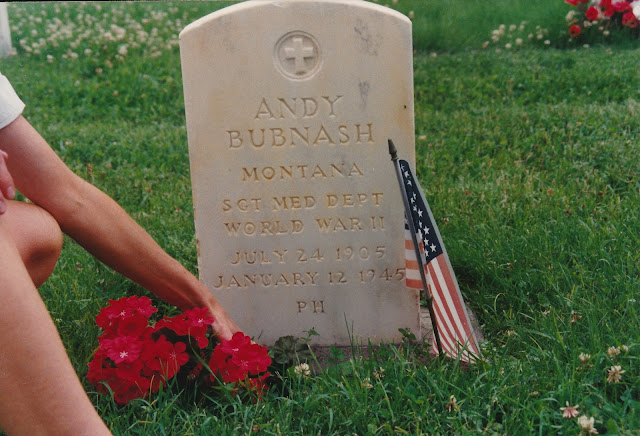 Andrew Bubnash was my grandfather John Bubnash's first cousin.  I don't believe they ever met.  After my grandpa immigrated to the US he remained in Pennsylvania for the rest of his life.  Andy's father and 2 of his uncles immigrated to Montana and lived there with their children for the rest of their lives.

Andy was born in Stockett Montana in 1905.  His father and uncles mined coal there for the Great Northern Railroad.  Once that work slowed down in the early 1900s the families moved into the big city, Great Falls, Montana.

Andy was married twice and to his first marriage was born a son Cecil in 1926 in Great Falls.

In July 1942 Andy enlisted in the US Army and became a medic.  Not much is known about his service until his death during the Battle of the Bulge.  Relatives relate that he was killed by a mortar round and died in the arms of another soldier from his hometown.  He is buried in Mt. Olivet Cemetery in Great Falls.

When the Army dispatched the telegram to inform the family of his combat death, it was accidentally sent to my grandparents in Pennsylvania.  They had to report that this was not their son--they had 3 boys on active duty at that time.  My grandparents suffered the dread and fear of opening the telegram, and then it was not about their son.  But it was someone's son, brother, father and husband.  I wonder how many families experienced the wartime agony of opening their door to a military telegram bearing tragic news.

Posted by Suzanne Bubnash at 6:34 AM