One of Newhall's marvelous claims to fame is the movie ranches scattered around the area.  A few have disappeared and others such as Disney's Golden Oak Ranch (Old Yeller, Roots, Pirates of the Caribbean) are still going strong in Placerita Canyon. 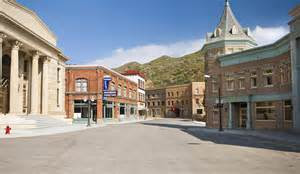 a set at Golden Oak Ranch

As a child I watched and loved black and white Western movies that were shown on Saturday afternoons.  In Westerns, the scenery should be listed in the cast of characters because of the strategic role it always played in shaping the on-screen drama.  I came to recognize places around the area that I had seen in these old movies, places such as Santa Susanna Pass or sites in the Newhall or San Fernando Valley area.  Even the movie sets, though altered for each film, had a sameness about them.

I believe Monogram and Republic were the first movie ranches around Newhall.  Republic was located where Golden Oak Ranch is now, and Monogram produced many hundreds of Westerns over a 50-year period (Gunsmoke, High Noon, The Virginian) before selling out to Gene Autry, the singing cowboy, in 1962.  He renamed it Melody Ranch and from there put on a popular TV program of Western music.  Still called Melody Ranch, it still hosts film production.

Randall Ranch was an equipment supplier to the movie business and was located over on Pine Street near the Pioneer Oil Refinery mentioned in yesterday's post.  Randall's had the props and equipment that films needed during production: stagecoaches and wagons, horses and buffalo, guns, Indian props, etc.  My sisters used to go over there and ride around on one of the buffalo.  Yeah.

An early movie actor named Hoot Gibson owned a ranch near the river that evolved into major rodeo grounds.  In the 50s it transitioned into Saugus Speedway and on still evenings we could hear the noise of the cars racing around the oval.  The place was later bought by my friend's parents and became the site of our almost death on the railroad tracks.

And a famous family of Hollywood stuntmen lived nearby--Yakima Canutt and his sons.  Yakima doubled for John Wayne and choreographed the wild chariot race in Ben Hur. 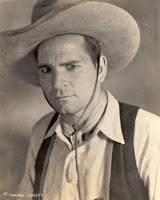 The Newhall Incident
What is probably the most tragic event ever to occur in my hometown, I have written about here.

Magic Mountain
There weren't enough teenage-level jobs to go around in the Newhall area until Magic Mountain (now Six Flags) was completed in 1971.  Previous posts cover Magic Mountain here and here.  It is still a very popular destination and is known for its crazy roller coasters.  I will say it was the most fun place I ever worked!

I am so lucky to have grown up in a place abounding with fascinating history, stunning landscape, and a rural wildness that has regretfully disappeared in the decades since my teen years.