In 1934 my Grandparents were living on the second floor of an average, but decent apartment building at 475 Pleasant St. in Holyoke.  Bustling businesses occupied the street level in the building, including the grocery run by their good friends, the Giustis.  It was the height of the Depression and the Ashes could not make ends meet.  An eviction notice arrived.  Grandpa did some sleuthing and found a cheaper apartment on Monroe St. next to the cemetery, for $8 per month.  Even that was a reach so he arranged to do odd jobs in exchange for a $2 discount on the rent.

Months later their youngest son, Bobby, became ill with what turned out to be appendicitis.  Grandpa visited him in the hospital every day.  Bobby exclaimed to him that he saw beautiful angels at his bedside.  My Grandpa's cousin Kitty Nelligan related to me that Bobby was sick in the hospital over Thanksgiving that year, and that the Ashe's raw turkey sat neglected on the kitchen counter.  She would never forget the bitter sadness of that turkey, with no one to prepare or eat it.  Thanksgiving was on the 29th that year, and Bobby died the following Monday, December 3.  He had celebrated his 6th birthday 4 weeks earlier. 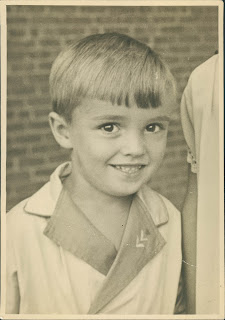 adorable Bobby
Grandpa and Grandma's devastation was deep and unrelenting.  They fled the gloom of Holyoke for the Washington Heights section of New York. With no funds to get them their own place, they lived with Grandma's sister Kitty S. for a while.  It was a terrible time.  Grandpa couldn't find steady work.  Kitty didn't let him forget that she was paying the rent.  He took his frustrations out on his children, Jim and Jean.   The family was on a rapid downward spiral.  Grandpa's heart was broken, his pride was crumbling.  Grandma was grieving and caught in the animosity between her husband and sister  My Uncle Jim distanced himself from his defeated father, and my Mom felt physically ill from the tension in the apartment.

Oh, of course--my Grandma was working.  My thrifty, go-getter Grandma.  She was a clerk in a department store, full-time.  In 1939 she had earned $150 at her job.  They got by in part because Grandpa periodically traveled back to Holyoke to work in his uncle's printing shop.  Once the war began Grandpa found steady work in New York.  Life improved.  They moved to a slightly better place.  In 1962 Grandpa retired, and because both of their children lived out West, they moved their things to be near our family in California.

Grandpa did not like California.  In an Eastern city there's stores and theaters, easy transportation and busy-ness.  He felt trapped in the suburbs and wanted to move back to Holyoke, the place he really loved.  It never happened.  He died of heart failure in 1963, barely a year after the move West.

He is buried with his parents and son Bobby in St. Jerome Cemetery in Holyoke.  A person never knows what is just around the corner in their life, nor can they ever know the answer to that most human of questions, "What if??"   What if his parents hadn't died young, leaving him an orphan?  What if he had finished high school?  What if Bobby hadn't died?  What if they had stayed in Holyoke?   There is no answer, just that a person must do their best in their circumstances.  Grandpa finally did and was mostly settled and content those last few decades of his life.   His life was adverse and now knowing more about his challenges and joys has helped me appreciate this man I hardly knew.