The Most Mysterious of Mysteries

Well, it's that time of year again folks, when we hash and rehash an important past event that interests Americans of all stripes and colors.  With one exception, everyone who participated came out of it well, and the story of what happened that day has become firmly entrenched in American folklore.

And no, I'm not talking about Thanksgiving, silly.  Once again it's time to revisit that most mysterious of mysteries, the disappearance of a passenger from Northwest Airlines Flight 305 between Portland and Seattle, on the bitter winter night of November 21, 1971.

Because it happened on Thanksgiving Eve, the story always pops up then, not on Nov. 21, the actual anniversary.  The one person who didn't come out of this tale hale and hearty, was D.B. Cooper.  That's a fake name, and no one, despite 44 years of investigation by the venerable FBI, knows who he really was.  Over the decades various men have been investigated, and private citizens have called the FBI to propose their own suspects: a family member who disappeared around that date, or a look-alike who works at the corner grocery, etc. 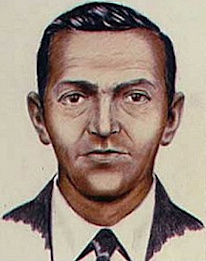 D.B. Cooper
I'm only bringing up the D.B. Cooper case this year because a new suspect, a plausible one, has popped onto the scene.  KGW's website (local news channel) carries a thorough article here discussing a Richard Lepsy of Grayling Michigan who vanished 2 years before the hijacking.  The resemblance between the two caused his daughter Lisa to remark,

"We were all sitting on the couch watching Walter Cronkite [in 1971]," said Lisa. "When the composite sketch of D.B. Cooper came on the TV screen, everyone looked at each other and said, 'That's dad!'"

Lisa has submitted a DNA sample and hopes the FBI will test it soon.  It would be nice for her to know either way, whether or not it was her father who passed a note to a flight attendant claiming he had a bomb, demanded parachutes and money, and then disappeared from the plane (and from the face of the earth) somewhere over southwest Washington on that dark night over 4 decades ago.

It would be kinda weird though, for everyone in the Pacific Northwest to know the answer to this intriguing mystery.  If the puzzle is solved, then what will we talk about every Thanksgiving Eve?  I guess there's always Bigfoot . . .