after a major quake

A common motivator for the influx of Californians relocating to Oregon has been to reside in a safe area, particularly a place without earthquakes. Well, the joke is on them. They have traded their land of devastating transform strike-slip and dip-slip faults, for a land with a history of catastrophic subduction-zone quakes. I would prefer the former. And so should you.

A quarter century ago a local geologist discovered a feature on the Pacific Coast he called "sunken forests." This astonishing find indicated a drastic, sudden change in coastline elevation. He found that on January 26, 1700, Japan suffered a tsunami that was not preceded by ground shaking. In other words, a tsunami had struck Japan without an earthquake to cause it, or so they thought. This is termed an orphan tsunami.

Geologic evidence shows that on January 26, 1700, the Pacific Northwest experienced a mega-earthquake of about 9.0 on the scale. The quake caused local tsunamis and sent a tsunami thousands of miles across the Pacific to Japan. It caused coastal subsidence in Oregon, resulting in sunken forests, in which the trees all die at the same time from sudden immersion in salt water. In the Columbia Gorge a mountain cleaved in half, tumbling the land into the river, now the foundation for Bonneville Dam. A subduction zone quake is extremely powerful, and this isn't the place to describe the science of it, but I will mention that this type of quake lasts from 4-5 minutes at magnitude 9. Yikes. 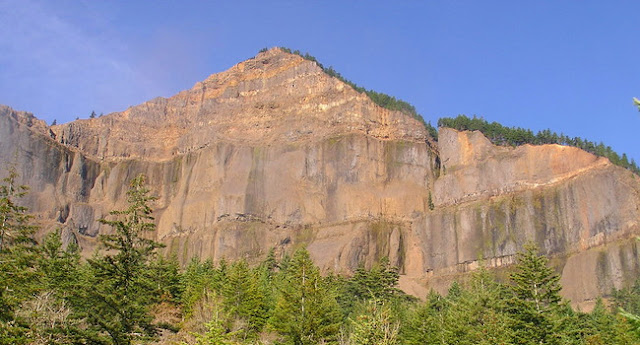 Bonneville Dam and beyond showing the tumbled half of Table Mountain

Late this summer the New Yorker published an article about the Pacific Northwest's next 9.0 quake, which is "overdue." In geologic terms that means it could happen today, or in a hundred years, but it will happen. The Pac NW has had 40 mega-quakes in the past 10,000 years, with the most recent being the one mentioned above, in 1700.

A wave of panic swept through our area as a million people were hearing about this for the first time. Even though the information has been around for over 25 years, it had remained in the background, like the low, steady hum of a refrigerator. Suddenly cities were holding meetings to train officials, and meetings to educate the public and meetings to plan for seismic upgrades, and meetings with other cities to create a regional disaster master plan.

The gloom and doom prediction says that over 10,000 people will die in the predicted quake, with 3 times that many injured. Bridges will be destroyed. Tsunamis will devastate the coast. Jobs will be lost, people will move away. In general, widespread aid will not be forthcoming quickly, because aside from Portland and Seattle, there are no major population centers within hundreds of miles that can offer help. The shocking reality that hits home is that residents will be on their own for survival, for at least two weeks.

The odds are the quake won't happen soon, and I would be happy if it didn't happen in my lifetime. But we will never go wrong by being prepared with food and water storage, fuel, medicine, and other emergency supplies. We have had these items stored for years, and in the next few months we will do a better job organizing them. And that's what we can do: be prepared and then hope it doesn't happen.