The Mysterious Disappearance of Olive, My Trusty Green Train Case

If you don't know what a train case is, meet Olive: Back in the day we didn't travel so light like now.  We packed an enormous suitcase (sans wheels!!) full of a vast array of clothes we would probably not wear AND we lugged along a train case full of personal items such as cosmetics, large hair brushes, jewelry, bulky feminine products, etc.  The cases had a nice size mirror mounted inside the lid.  This ridiculous method of travel was a holdover from the days of elegant train travel when women journeyed in silk gowns bedecked with diamonds and porters hefted their multiple trunks onto the train, then delivered them to their mansions upon their arrival.
Olive was a gift to me from my folks about my 12th birthday.  I lugged her around the country a zillion times over several decades.
Unknown to me, Olive had a twin sister who made an appearance on the baggage belt one fateful day about 30 years ago.  She wasn't an identical twin, but you can see why the two got mixed up when they were not standing side by side. 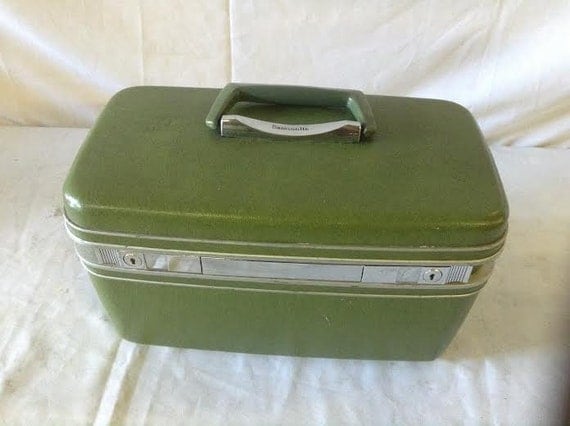 I stood in baggage claim waiting for Old Yeller (my giant yellow suitcase, a story for another day), and then for Olive, who was nowhere in sight.  Bags disappeared from the belt one by one, and then only one remained, which you see above.
Mmmm, it wasn't hard to put two and two together.  Someone had mistaken Olive for their own train case and absconded with her to points unknown.
I did what one does in this situation: reported her disappearance to the baggage dude and filled out a detailed report.  My only hope was that Olive's thief would miss her twin as much as I missed Olive.  I left the orphaned case on the belt for baggage dude to deal with.

Well lah-di-dah, I had barely stepped in the door from the airport when the phone rang.  It was the thief, or more kindly, the careless person who had grabbed the first green train case she saw.  You must realize something before I go on.  Portland International Airport--PDX--is the only major airport in our entire state and also serves southern and eastern Washington.  I feared that Olive ended up hours and hours away and how would we get her back if she was hold up in Roseburg (3 hours away) or Klamath Falls (6 hours!)??

Careless person found my phone # on Olive's tag and asked if I had her case.  Sorry, left it at PDX.  I asked her what town she was visiting?  Beaverton!  Oh.  My. Heck.  How could I get so lucky??  We live next to Beaverton.  What a grand relief!   I inquired as to where in Beaverton--give me an address and I'd be happy to run over.  Well, we're at a house on Ridgetop Lane, she said.  Double OH. MY.  HECK.  I live about 20 yards from Ridgetop Lane.  We're visiting G&H she said.  They're my neighbors!   With all the possibilities of Olive's whereabouts, there she was, a 30 second walk around the corner.  I was just sorry I hadn't brought their green case home so we could make a simultaneous exchange, you know, like when you see spies in old movies exchanging the goods while standing on each side of the East German/West German border.

Olive returned home and all was well.  Last year we endured a painful separation when I gave her up to Goodwill.  Hope she's found a loving home.  Ah, happy memories.
Posted by Suzanne Bubnash at 7:17 AM