My Dad served on the USS Missouri (BB63) for several years, beginning with the shakedown cruise out of the Brooklyn Navy Yard in mid-1944.  It was an important and exciting time in his life, and he spoke about it regularly during my growing-up years.

In 1984 we took our children up to Bremerton Washington early one morning to tour the Missouri.  It was not yet mothballed but moored at the harbor there (6 years later it was back in action for the Persian Gulf War).  This was my first time visiting the "Mo" and I was riveted by the spot where the kamikaze hit the ship, a story Dad had related again and again.  What a thrill to see the special plaque implanted in the deck, marking the very spot where the treaty to end the war with Japan was signed on September 2 1945.

Tourists were not allowed below the deck which saddened me.  Dad had described the complicated innards of the ship to me, which I hoped to see someday.  He remarked on the extremely tight quarters where sailors' bunks were shoehorned into every available nook and cranny.

Every June during Portland's Rose Festival, the city is visited by ships that tie up at the harbor wall while sailors come ashore to enjoy the festivities.  In 1990 the USS New Jersey (BB62) was among that year's visiting ships.  Because its tall tower could not fit under the city's bridges, she docked further north in Portland's industrial area.  The New Jersey is a sister ship to the Missouri, meaning that they're pretty much identical.  I took our children down to the dock for a tour.  We marveled at the massive guns that could lob shells 20 miles inland, the bulging boa-like ropes and chubby cables, and the gigantic anchor with chains even Samson himself couldn't burst.  I enjoyed the tour but wished the general public could explore below deck. 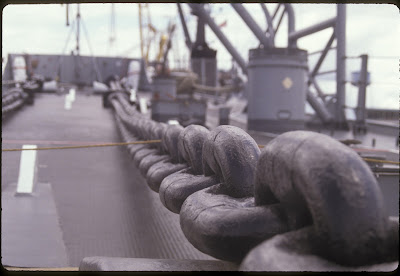 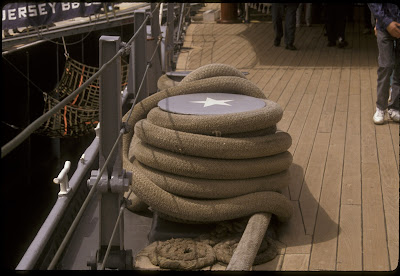 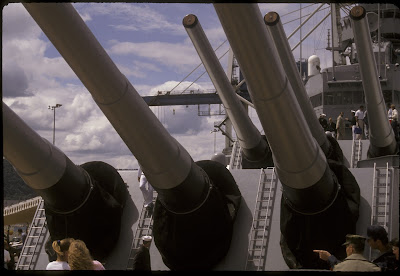 Before the New Jersey departed Portland, I made a second visit with only 4-year-old Teresa in tow, to spend more time viewing the details of the ship.  She became my golden ticket that day to get below deck.

As we approached the ramp leading up to the ship, exuberant Teresa tripped and fell, scraping her knee on the asphalt which drew blood.  To me it was a routine childhood injury which I cleaned up with mama spit and kleenex.  The teenage sailor monitoring the visitors saw the wound and declared it serious enough to call up a medic.  The medic determined the raw red knee was in need of immediate attention and bade us follow him onto the deck, and then through the hatch-way to the depths below.  I had just won the lottery!

Dad hadn't been kidding, it was extremely tight below deck.   There were no stairs, only ladders leading down down down into the dim bowels of the ship.  We descended several levels, me negotiating the ladders with one hand, and my other arm tight around Teresa's middle.  A few levels down there was barely room to turn around.  Mr. Medic instructed me to lay Teresa on a short, narrow shelf squeezed into a hallway, and then he worked with great care on her knee, finally wrapping it with a huge bandage held on by what seemed like yards and yards of white adhesive tape. 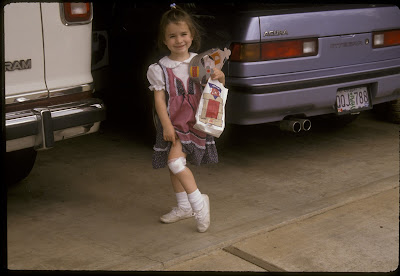 While he worked I took in the surroundings.  Bunkspaces were sandwiched in between floor-to-ceiling walls of electronics.  I imagined the ship burgeoning with the 2000+ crew she could carry.  What a bustling place these decks must have been during wartime action.  Every sailor was assigned a shift and a particular job on that shift.  Each was a piece of a vital puzzle.   In times of emergency, such as when the kamikaze hit, it was all hands on deck as fast as they could get there.  The privilege that was mine to see the netherworld of an American battleship did not escape me.  And I have Teresa's blood and tears to thank for it.

The Missouri and the New Jersey docked together
Posted by Suzanne Bubnash at 7:20 PM