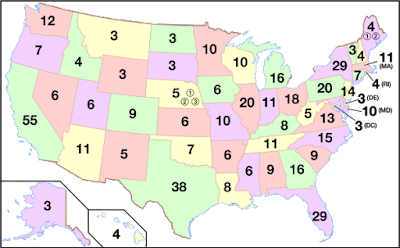 Susanne from North Carolina suggested remarks on this topic.

In my opinion the Electoral College serves a purpose in our country that is as appropriate now as it was when adopted in 1787.  It seems weird to us, that our popular vote doesn't elect the president directly.  Even more so every time the popular vote count is the inverse of the Electoral College result, as happened in 2000, and again a few weeks ago.  It also occurred in 1876 and 1888, and in 1824 (which btw, was the only time the election of an American president was thrown to the House of Representatives).

I don't pretend to understand all aspects of the E.C., but here are some facts and thoughts:

The government of the United States is wisely state-based and population-based, which prevents larger states from controlling all of the issues facing our country.  Every state has 2 Senators regardless of size, and each has Representatives in proportion to its population. The E.C. is in place for the same purpose.  Without it the population centers of the country would elect each president, meaning New York and the Eastern Seaboard, California, Chicago, Miami, Phoenix, Houston and Seattle would determine the winner in national elections.

If there is apathy towards voting in 2016,  imagine a national election without the E.C. giving a voice to every part of the US.  Voters in rural states might as well stay home.  If low-population areas see few national candidates on campaign routes now, without the E.C. in place, candidates wouldn't even bother to campaign in areas whose numbers are so low it's hardly worth their time.

Barbara Boxer, Democratic Senator from California recently said, "The Electoral College is an outdated, undemocratic system that does not reflect our modern society, and it needs to change immediately. Every American should be guaranteed that their vote counts." She hasn't done much research on the E.C. if she thinks that every American vote will become more significant without it.  The Founding Fathers put this system in place to ensure that we all have a voice.

Watch this video for a clear explanation of the Electoral College.