A Perfect Storm in 1920 Brattleboro, Vermont 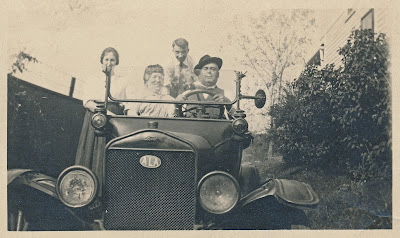 A swell Sunday drive: my Grandpa, James Ashe, is standing in the rear, his cousin Catherine Brosnahan is standing at left, and seated are his aunt and uncle, Catherine and John Sullivan; my date estimation is the late 19-teens

Back in the day small-town newspapers broadcast the private affairs of local citizens in what was commonly called "the personal column," or just "personals."  You could discover your neighbor's vacation plans, read about their illnesses and hospitalizations, their visitors, their loss of a job or the luck of finding new employment.  The personals would tell you who traveled to attend a funeral, a wedding, or for business.  Maybe you could even find out how your grandparents met for the first time!  Yes, you could mine this precious nugget.

My Grandma Ashe--Alice Estelle Toomey--told me that she met my Grandpa--James Matthew Ashe--when they both chanced to travel to Brattleboro Vermont the same weekend to visit a mutual cousin, Mary Sullivan Cook.  A mutual cousin?   Yes, but my grandparents were not cousins of each other. Huh?

Alice was a born-and-raised Brooklyn-ite and she and her friend Lillian Fry took the train to Brattleboro, Vermont, to visit Gram's cousin Mary.  Jim was a born-and-raised Holyoke, Massachusetts man.  He and his Uncle Steve Doyle traveled by car to Brattleboro for a visit to Jim's cousin Mary.   A perfect storm converged on Mary Sullivan Cook's Williams Street house on a hot August day in 1920.

Mary suggested the four of them go for a drive in Steve Doyle's car.  There was room for only two so Alice jumped into the car with Jim; Steve was a much older man who didn't appeal to her.  Lillian and Steve went for a walk while Alice and James changed our family history. And that's the end of Alice's story.  Well, not exactly.  They eventually married and had three children.

One day I was perusing on microfilm The Vermont Phoenix newspaper, published in Brattleboro, scanning for snippets on relatives and their neighbors.  My eyes bugged out when I saw: "James Ashe and Stephen Doyle of Holyoke, Mass., were guests Sunday of Mr. and Mrs. Charles F. Cook, coming by automobile."  Wow, could it be?  Could this be the occasion of my Grandparents' first meeting?

The answer is: yes, it could.  A few lines down I read, "Miss Lillian Frye and Miss Alice Toomey of Brooklyn came Saturday for a two weeks' visit with Mr. and Mrs. Charles F. Cook of Williams street."  So there it is.  My Grandparents met on Sunday, August 1, 1920 at their Cousin Mary's house at 33 Williams St., Brattleboro Vermont.  Alice must have been pretty close to Mary, because she and Lillian stayed two weeks!  Yikes.  Mary's house wasn't big.  Alice had other relatives in town, and the streets were very walkable.  Much of their time could have been spent out of the house.

As to how each of my Grandparents was related to Mary Sullivan Cook, it's loose and complicated connection, so I'll just say that Jim's aunt Mary Doyle Brosnahan was was a cousin-in-law of Mary Sullivan Cook's mother.  I told you it was loose.

On Alice's side, Mary Sullivan Cook was related to Alice's mother, also named Mary Sullivan, but even more indirectly than Jim's connection.

Irish records being the black hole that they are, these murky relationships are hard to define.  However, the good news is that the Holy Grail has been delivered.  A few months ago, the original images of Irish Catholic parish records were made public online for the first time.  It will take a while, but I hope that careful searching will reveal the exact relationship of Alice to Mary Sullivan Cook.

My Grandparents did not marry for three years after their meeting.  Wish I knew more about their three-year courtship.  Jim was working in the theatre district in New York as of 1920, at least part of the time.  Perhaps during his off-hours he hopped on the subway to Brooklyn to spend the day with Alice.

I do have this photo dated 1921, a year into their relationship.  I thought it  was taken on the farm belonging to Jim's cousins in South Hadley, Massachusetts, but a cousin told me recently it is not that farm.  Perhaps further scanning of The Vermont Phoenix and an examination of The Holyoke Transcript will reveal more details about my Grandparents.  You never know what you will uncover in the pages of an old newspaper. 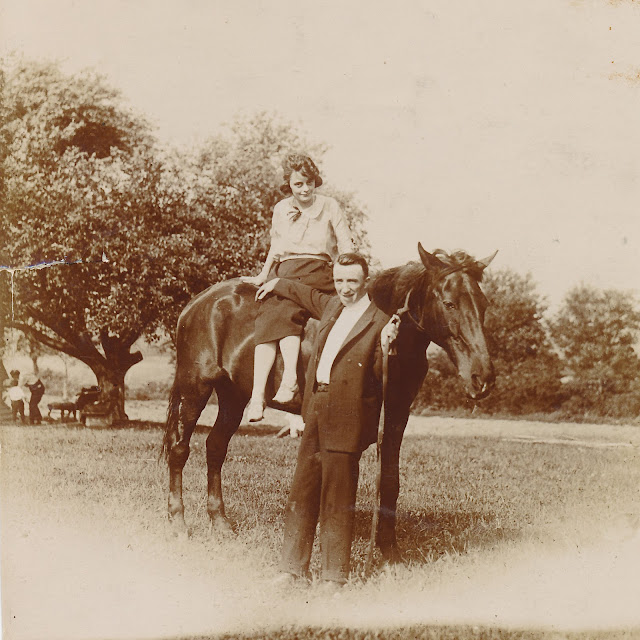