The Crystal Ball of History

Working backwards in time is the method by which family history is done.  The beginning of a life can be discovered only when the end is revealed.  The sunset of a life story is known before the dawn.  Terrible events and unpleasant endings to life are common; if only a researcher could travel back to an earlier time to warn the now dead, or even prevent the dangerous and harmful events that occurred in their lives.  Of course it can't be done.


Cornelius Flanagan
Cornelius Flannigan grew up in Brattleboro Vermont of Irish parentage.  In his 70th year he lived alone on a small island in the middle of the Connecticut River.  The island was connected to both the Vermont and New Hampshire shores by the Hinsdale Bridge, which was anchored halfway across at the island.  In the late winter of 1920 ice clogged the river, imperiling the stability of the bridge.

Cornelius spent a day in town, then headed home late that March evening.  A sheriff deputy saw him heading toward the bridge and home and warned him not to cross the bridge as it was being inched away from it's mooring by pressure from the ice.  At the bridge another sheriff announced the span would probably fail soon, and he must not cross.  Cornelius inspected the mooring carefully, then proceeded ahead.  Halfway across the unstable planks he changed his mind.  He ran back toward the shore as the bridge began to heave.  He never made it, and was carried to his death on the wrecked span under the surging ice jam.

After reading this in a 1920 newspaper, I found Cornelius on four or five census records beginning when he was a child of eleven.  I visualized his happy disposition and cherished spot as the only son in his family.  But I had already discovered his unpleasant, icy end, and in my mind the words, "don't cross that bridge!" jumped out of my brain.  I was as a gypsy fortune teller looking at his name on the page, able to predict his frozen demise. 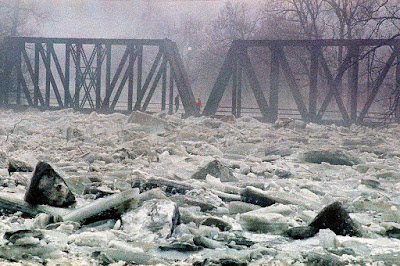 Maurice Ferriter and Michael Griffin
Maurice Ferriter and Michael Griffin were two of scores of Irish children growing up in 1870 Brattleboro.  Irish parents did not have the luxury of showering attention on their children, so they were left to roam--the original 'free-range' children in today's parlance.  Fathers worked excessive hours on the railroad, in the slate quarry, or in one of the organ, chair, or peg factories clustered near the confluence of the Whetstone Brook and Connecticut River.  Mothers toiled ceaselessly to feed their families, launder, maintain their humble homes, and do piecework for the wealthier folks who lived uptown.

On a fall day in 1870 Maurice and Michael were part of a group of children out roaming the Irish patch (neighborhood).  In one of their homes Michael spied a rifle leaning upright in a corner of the room.  He picked it up and in jest, pointed it at Maurice and pretended to shoot.  The gun went off and where a rambunctious Maurice had stood was his heaped, bloody, whitening corpse.

Michael ran in panic from the horror and was found late that day hiding in the woods.  He couldn't be blamed for his impulsive, childish act, yet he was never right again.  Just weeks later he was killed in the train yard by a moving locomotive.

It's eerie then to discover this terrible accident, and then moving back in time, to see these two carefree boys enumerated with their families on the 1870 Census, and then to find their birth information.  In my mind's eye I could see them toddling around the kitchen, attending the town school, and enjoying the liberty granted to children back in the day.

These are two of countless instances of a warped kind of prescience that dogs me and other family historians when we dive into the records of the past. 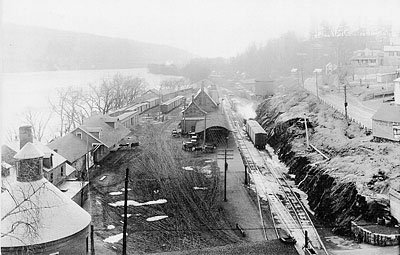 The train yard where Michael met his end.  Photo is later, circa 1900; gas house is on the left, depot in center.  Michael and Maurice lived in the distance (past the depot) to the right of the tracks.