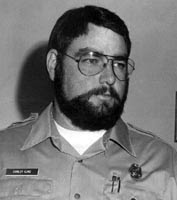 This outrageous Idaho murder case from the early 1980s came to mind this week. The perpetrator of the crime was never in question, and the hunt for him went nationwide--twice. The perp was Claude Dallas. He has been romanticized into a macho, independent, self-sufficient mountain man who was good with a gun and a target of women. In truth he was none of that. Dallas adopted a "movie cowboy persona" who was without genuine charisma or appeal. His supposed machismo was a lie--he was a poacher who wasted wildlife, who despite his mountain-man boasts depended on friends and regular jobs for survival, and worst of all, he murdered two Fish and Game wardens in cold blood in Bull Basin, an isolated corner of southwest Idaho, on January 5, 1981, when they caught him poaching. Conley Elms and Bill Pogue were the victims.

Due to the remoteness of the crime, word of the murders didn't reach civilization for a couple of days. It descended on Boise on a crystally cold, frosty winter afternoon, and by the end of that work day Bill Pogue's original art work, which was for sale in various local shops, had been grabbed up by collectors. The shocking news depressed the city--Boise was still small then, and was peopled by folks who, if they didn't know the victims, probably knew someone who knew them.

Dallas wasn't seen for 15 months, then was captured in a shootout in Paradise Hill, Nevada, tried, and got off easy, convicted of manslaughter. Some jurors believed he felt threatened because Pogue pulled his gun on the poacher (Dallas's statement; no witness). Pogue never fired. Both he and Elms, who was not armed, were shot down by Dallas, then executed by a shot in the head as they lay helpless in the dirt. Elms's body was left in the camp but Dallas buried Pogue out in the desert. During the trial when he revealed the location of the body, Pogue's brother hastily left the courtroom to locate the body and remove it for proper burial.

The trial was a sensation in Idaho. The venue was switched from remote Owyhee County to more populated Canyon County. Owyhee's courthouse was tiny and no way could they host trial participants plus the media and the public. Groupies followed the trial. One band of women coined themselves "The Dallas Cheerleaders." I don't know what they saw in a dumpy, cold, calculating murderer, but he had taken on a folk-hero aura in the minds of anti-government folks who wanted to believe that he shot in self-defense.

Dallas was sentenced to prison and in a few short years escaped, leading to a second nationwide manhunt that lasted 12 months. It ended in a 7-11 convenience store in Riverside California. Mmmm, what kind of mountain-man shops at a 7-11?

Dallas has been out of prison for 10 years now. His life and crime have been woven into ballads and tall tales, and generations from now will be one of those curious legends Western folklore is cut from. Elms and Pogue won't be forgotten. They were two lawmen doing the job they were paid to do, who had the sad misfortune to have a run-in with a savage killer. 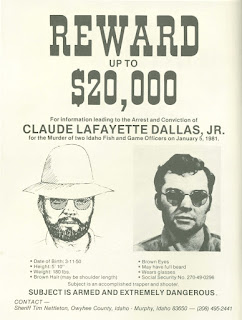 The Ballad of Pogue and Elms