While writing about our trip to Europe earlier this month a few random thoughts and experiences came to mind. 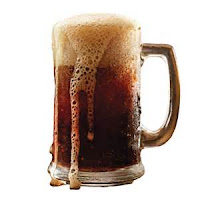 In that blazing stifling hot summer of '76, we discovered that McDonalds in London served pop with ICE.  Not just any pop.  Ice. Cold. Rootbeer.  It was the relief we'd been waiting for.

Surprise--the most affordable meal in the British Isles was yummy fish and chips.   We ate plenty of it. 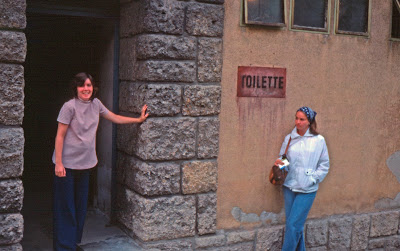 Yay, we found a bathroom!

The challenge of finding a restroom: I was in Europe from approximately months 6-8 of pregnancy,  and y'all know what that means.  Unfortunately for me, bathrooms were nearly as hard to come by as ice and AC.  Sometimes the nearest one was a mile away, which meant I needed a strategic bush on the way TO the bathroom to allow me to get there without a mishap.  Sheesh, what did European women do?

Most B and Bs charged extra money if you wanted to take a bath or shower (showers were rare).   50-75 pence was normal, 50 pence being a little over a dollar then.  At times we went a week in between formal bathing, and cat baths had to suffice--their price was right. 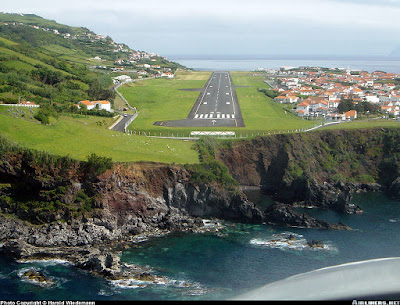 Weird, I know, that we flew to Europe via the Azores Islands: Our flight was stranded in Philadelphia because that very morning Canadian air traffic controllers had gone on strike, precluding our plane from flying over Canadian airspace.  After 4 hours on the ground in Philly while a solution was in the works, we boarded, took off, and were told we'd be landing somewhere in the Atlantic for refueling.  And that somewhere was the Azores.  The islands are a stunning sight from the air.  In an azure ocean sit islands of emerald green edged by rugged coffee-colored cliffs continually bashed by foamy whitewater.  Wow.
It was imperative to catch the Friday train to Dingle, County Kerry, from Dublin.  There were no weekend trains to Dingle and we didn't want to blow our chance to see my ancestral village.  We misjudged our time and realized we would have to run for the train station, a full mile away.  With our frame packs on.  And me 6 months pregnant.  As we jogged along, and we must have been a sight to see, a car pulled up at the curb.  A jolly Irishman stepped out to see where we were going.  On a map he showed us shortcuts to the station.  We arrived just as the train was beginning its pull out of the station.  I think about that nice man once in a while. 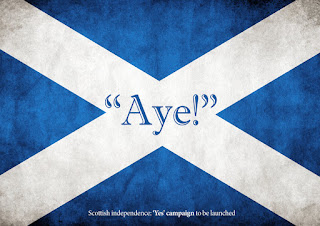 In Part 1 about our European trip I mentioned our Scot friend, Hugh Ross, of Wigan England.  He was big on Scottish nationalism, and spoke about Scotland going for independence.  Scotland's boon of North Sea oil created an opportunity for independece.  Well, 40 years later, it still hasn't happened.  The referendum of several years ago kept Scotland as part of the UK.  It will come up again and perhaps independence will happen.  But Hugh will not see it, at least not from this side of Heaven. 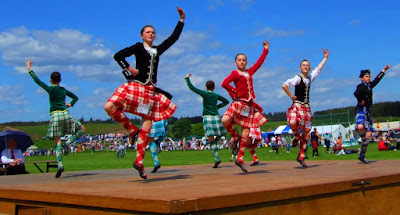 Hugh's sister May who lived in Inverness was very kind to us.  In addition to what I mentioned in the other blog post, she took us to a cultural festival featuring Scots dancing, pipes piping (but no lords-a-leaping) which was really fun.  She drove us to the site of the 1746 Battle of Culloden where raised mounds of earth belie the location of the mass burials of each separate Scottish clan. 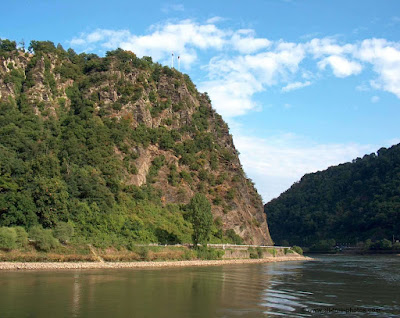 the photo we didn't get: The Lorelei