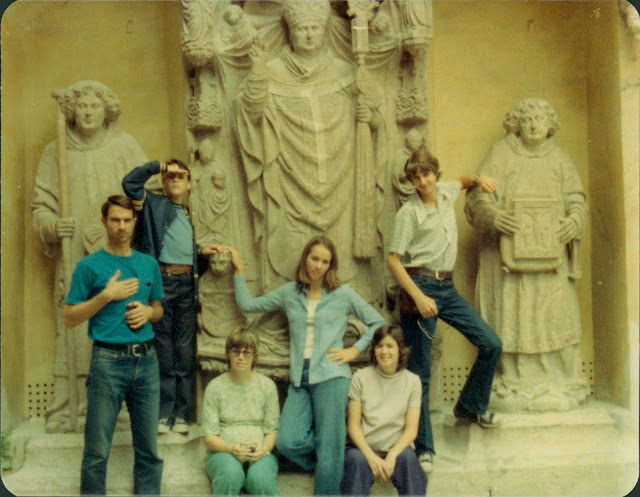 Craig, Kevin, Barbara, Sandy, Suzanne, Glade at a monument in Germany or Austria
Sorry to say that we didn't know better than to get that close to a priceless memorial

Luxembourg Station wasn't the Hilton, but we squeezed in a few hours of rest before the place reopened at 5 a.m.   We went on to Trier Germany, closer to Barry's place.  On phoning Barbara we found they had not received our postcard asking for a pick-up in Luxembourg.

1976 was an Olympic summer but Barry had no TV.  Craig's first order of business was to find a place to rent one.  The coverage was skewed to what most interested Germans, naturally.

Craig could hardly wait to head for Dusseldorf where he served his LDS mission 1971-1973.  We attended an uplifting church meeting there, then went on to other cities to see Germans he had known well.  I enjoyed meeting and staying with the Krappe family in Essen, and Herr Krappe gifted me with a small carved wooden elephant out of his collection of all shapes and sizes of elephants.  Sister Mueller, a widow in Oberhausen, was delighted to see Craig.  When we left her she gave us a soft pink and gray baby shawl she had crocheted for our coming newborn.

Our second experience with non-received communication was about to happen.  We had sent a card to the US telling June and the gang that we would pick them up in Aachen that night.  Mmm, no Walkers were waiting in Aachen.  Maybe they got off the train in Leige Belgium.  I'll never forget the mystical, magical aura of Leige late at night; the city glowed in the soft lights of midnight, reflecting in the Meuse River.  Breathtaking.  But no Walkers in Liege either.  The best we could do was to head back to Barrys, and Craig had to navigate a terribly slow windy road all the way back.  It was 4 a.m. when we arrived, and there were the other Walkers.  They had got off the train in Luxembourg and been picked up by Barry.  Oh, for the lack of cell phones!

Many sincere thanks to Barry and Barbara for putting up with all of us.  Their small apartment somehow held, in addition to the 4 of them, Craig, June, Sandy, Glade, Kevin and myself.   We pushed Barry's VW van over maximum occupancy and we survived.

Craig and I borrowed Barry's small car to make a short trip to France.  Sticker shock set in right away when we discovered the freeways charged exorbitant tolls.  Country roads were slower and more scenic: Verdun, Reims, Chartres, Montargis, Joigny, Avallon, Chaumont.  Typical Americans, we got caught in the crazy traffic merry-go-round at the Arc de Triomph--it moves so fast you can't get out. 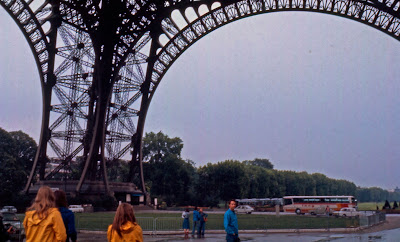 This spot below the Tour d"Eiffel had to suffice; the price was right (free)

More sticker shock: food and gas prices, admission prices, bathroom fees, everything was way over our student budget.  We slept in the car to save $$.  Yeah.  Rather than going up in the Eiffel Tower, we stood beneath and looked skyward, taking in the free view.  The Palace of Versailles was a priority with the little cash we had, a marvelous place with geometrically perfect gardens. 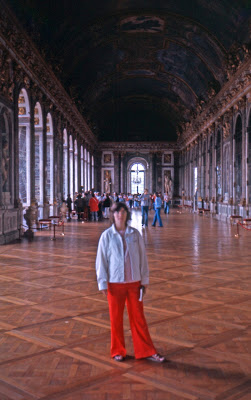 Palace of Versailles
We ate a memorable pizza one night in Auxerre, memorable because it had anchovies on it, which we pulled off.  Anchovies had been the only French word I couldn't translate on the pizza menu.  One of my favorite sites in France was Vezelay, which we deliberately visited just to see the spot where St. Bernard of Clairvaux preached the Second Crusade.  If I could have been a fly on the wall in Vezelay in 1146. . .

Near the end of our incredible trip we traveled through Southern Germany and Austria with Barry, Barbara, Kevin, Glade, Sandy, Craig and me.  June stayed behind to take care of Barry's little boys.  We visited Dachau, Munich, Salzburg, Vienna, camping along the way.  European camping is not the quasi-wilderness experience we get in the US.  Tents are pitched within a couple of feet of one another.  Each resembles a circus tent--wild colors with multiple rooms and windows in them.  The Europeans bring their china and crystal with them.  No cooking dinner on sticks over a fire when you camp among Europeans.

I have to say we got along pretty good, all crammed in the apartment and crammed in the VW van.  Anyone who could put up with my obnoxious bossiness was a saint.  Certain others had their annoying habits, but we pretty much kept our thoughts to ourselves and enjoyed the company.  The VW van was often the slowest car on the road, which provided plenty of laughs.  And who could forget the time it got stuck in a parking garage in Salzburg, because we had the luggage rack stacked too high . . .

Craig and I headed for home around August 24th, but not before we had the disastrous lost passport fiasco written about here.

40 years ago we had the opportunity of a lifetime and we took it, and have never regretted it.  I'm grateful for those 2 months and all who made it possible.