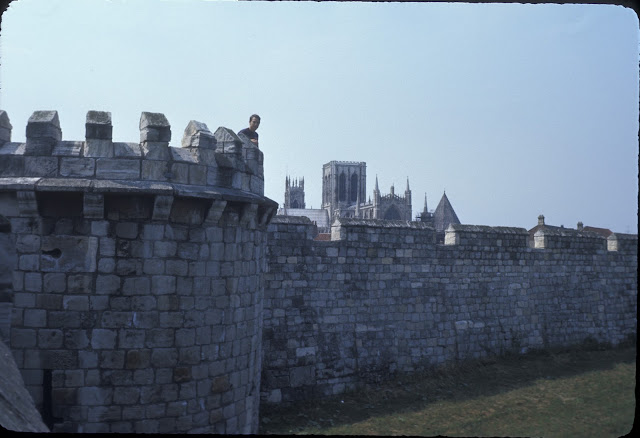 Craig on the parapet of York Minster

In early 1976 my mother-in-law, June W., proposed that we accompany her and some of Craig's siblings to visit Germany that summer.  Craig's brother Barry was serving in the US Air Force near Bitburg, and his home could be a base from which we could explore Germany and the surrounding countries.

We were indigent college students but June offered to pay our airfare, about $450 each (which we could pay back later--did we??).  I had just found out I was pregnant with our first baby yet we threw caution to the wind and signed on.  We took advantage of the upcoming summer off from college and, interested in getting our (June's) money's worth, made plane reservations to cover a 2-month time period, rather than the 3-week trip June and the others were planning.

I want to pay tribute to June for giving us this opportunity 40 years ago this summer.  We knew we would  never again have a block of time like that to spend traveling, and our family would be growing, curtailing the opportunity to take this kind of vacation.  Spending two months traveling through Europe enriched my life deeply, and so thank you June, for including us in your plans that summer!

On June 21, the 25-week point in my pregnancy, I left my sweat-shop job at Mona's sewing factory on  Center Street in Provo, and off we drove to Los Angeles in our less than reliable "chuck-wagon," a 1966 Chevy Impala Station Wagon (a story for another day).  Wendie loaned us sleeping bags and frame backpacks.  Our flight to Amsterdam left from LA, routing us via Philadelphia and the Azores Islands (another story for another day).  We suffered through a night in a seedy dive in Amsterdam's red-light district.  It wasn't cheap at 36 guilders ($13).  Next morning a ferry took us from Hoek van Holland to Harwich, England.  A train whisked us across England to the port of Holyhead Wales.  A ferry across the foggy Irish sea got us to Dun Laoghaire, Ireland. 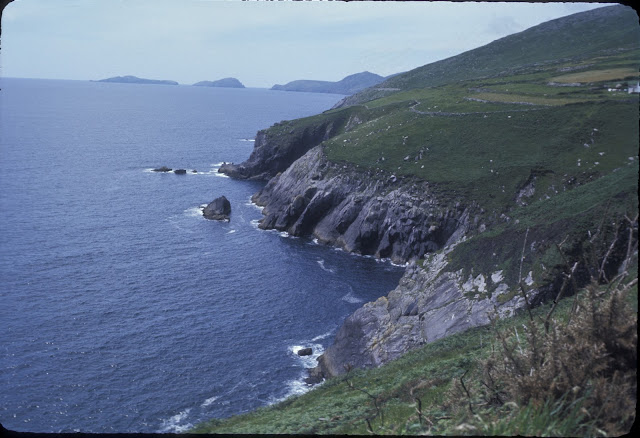 Irish coast near Slea Head, just about as far west as you can go in Europe without tumbling into the Atlantic

We enjoyed Dublin, although we were shocked by the baking heat.  The summer of '76 turned out to be the hottest in the British Isles in over 250 years, and we hit the misery jackpot head on.  Water fountains and air conditioning and ice cubes were unheard of, bottled water didn't exist, and I won't even get into how desperately we craved a refreshing, icy gulp of water or frosty puff of air.  One smothering day I staggered into a Dublin pub, collapsed onto the cool, soothing linoleum floor, and pleaded for a drink of water.  Which was warm, but ok, I was glad to have it.

With our $33 Irish bus and rail pass we could go anywhere.  We shot west across Ireland for a marvelous sunny weekend in Dingle where half my ancestry originated.  Close to town familiar family names popped up on businesses--Ashe, Griffin, Brosnahan, Shea, Sullivan.  We saw abandoned roofless houses; apparently the seaport of Dingle had seen better days.  Mrs. Hands B&B cost us a welcome bargain of 1.90 pounds each.

Galway was an easy destination by train.  We watched Jaws in a theatre in Galway, and just so you know, every seat in the theatre was equipped with an ashtray, and smokers made vigorous use of them. 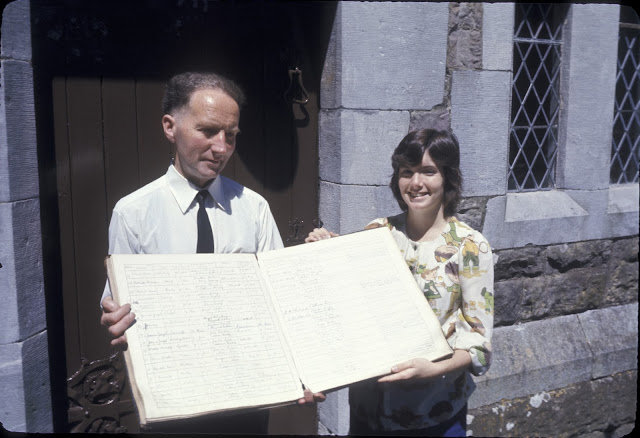 Dingle Parish Clerk Padraig Lynch was caretaker of the old BMD registers; on this page I found some of my Irish family

On our return to Dublin a youth hostel offered accommodations for 75 pence each.  In the interest of genealogy, I went to the National Library of Ireland and the Four Courts to do some research.  Now, I can see Griffith's Valuation online in my home; then, we sifted through brittle old papers looking for the Holy Grail.   The treasured Book of Kells displayed at Trinity College is stunning.

Bidding a sad farewell to Ireland, across the Irish Sea to England and Scotland we went.   For two weeks we traveled via BritRail the length of Great Britain.  Our friends, Cora and Gordon Matthews put us up in their flat in Hornchurch near London.  Evelyn and Hugh Ross, friends of June, invited us to stay in their house in Wigan, near Preston.  We spent America's Bicentennial that July 4th Sunday at church in Wigan and the evening on a hill enjoying the view of the once-mighty harbor of Liverpool.

At the Ross home we were treated to Scottish Hugh's bitter diatribes against the English, including the shocking revelation that, according to Hugh, Queen Victoria "peed the bed."  He resented everything English except his monthly pension earned from his apparently punishing years working in an English post-office.   We got to hear Evelyn's darling elderly father's daily guttural calls for Ehhhhhhhhhhhh--v--LYN!  that echoed through the vast 2-story house every time he needed something.

Hugh Ross's sister May and her husband Jackie invited us to stay first at their home in Inverness Scotland, and even sent us on a Loch Ness cruise.  No monster surfaced that day.  They drove us up to their huge old family homestead in Cromarty on a headland of the North Sea for a few nights, the furthest north I had ever been.

We visited Edinburgh, York, Chester, Cambridge, Canterbury, Stonehenge, and a host of other locations on the island.  I loved the cathedrals and crypts and castles, the museums, Roman ruins, universities.  The history I knew came alive!  We visited a special exhibit in London portraying the American Revolution from the Brit's point of view.  Apparently King George III wasn't so popular at home either.

At the end of our 3-week British Isles adventure we sailed across the Dover Strait to Ostend Belgium on the European mainland, where we boarded a train for Luxembourg.  We expected Barry's family to pick us up at Luxembourg station.  Uh-oh, they were nowhere in sight.  What to do?  Roll out our sleeping bags on the grimy, filthy floor to grab a few zzzzs, that's what.   [Part 2 tomorrow] 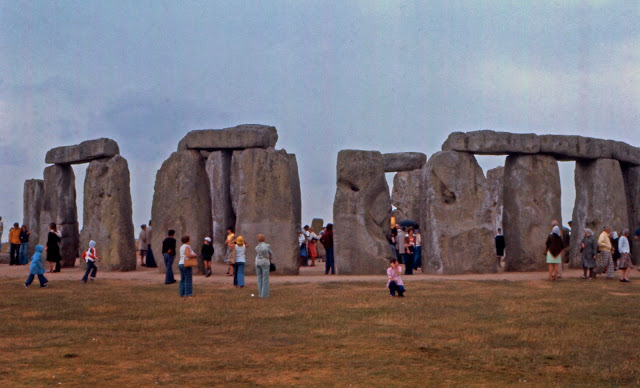 That's me, crouching in front of Stonehenge.  Back in the day there were no fences--you could actually crawl on the stones that were lying on the ground 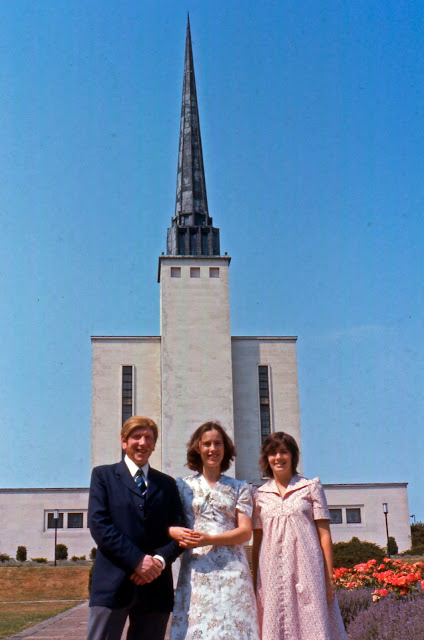 We attended the London Temple with our friends, the Matthews 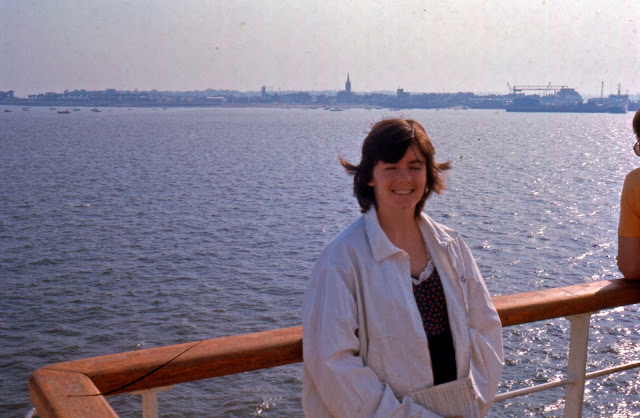 Ferry to the mainland, Dover England to Ostend Belgium