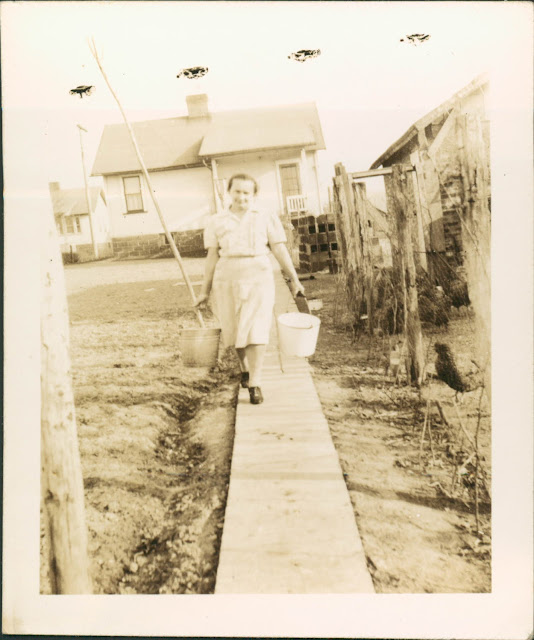 I've always loved this photo of my Baba taken probably in the 1940s. She would have been in her mid-40s. Her purposeful stride down the boardwalk with a bucket in each hand shows a woman tackling her chores head-on. She never shied away from hard work, and neither did her husband or children.

The house behind her is the company house my grandparents bought from the Frick Mining Company about 1936. Where they put all the family bodies, I don't know. It was a tiny place. When Dad was maybe in his teens he and his brothers dug a cellar underneath, but it was for storage, not for sleeping. By 1936 Aunt Mary had moved to New York but that still left six children and two parents in the place. Back in the day if a family member had requested privacy they would have been sent out with the cows.

After World War 2 the family bought additional acreage to farm. They had a truck garden, and also grew tomatoes for the Heinz company. Not much later the State of Pennsylvania took about half the acreage for the new state highway, and the family got more money for that portion than they had paid for the entire piece a few years earlier. On their new highway frontage they built a gas station, grocery store, diner, and a beer distribution business. The photo appears to be from before those structures were built.

The current term "working woman" means something quite different than Baba's type of working woman. Physical labor didn't do her any harm. She lived to be a hundred years old with all her faculties!
Posted by Suzanne Bubnash at 5:00 AM