For the past four years my church calling has been to serve the young women of our ward. In The Church of Jesus Christ of Latter-day Saints, members serve in some capacity, and that service is assigned by or through the Bishop of the ward. That service is known as a calling, and we are entitled to divine inspiration to help us in that calling.

The Young Women organization (and its counterpart, Young Men), involves youth ages 12-18. Within the Young Women the girls are divided into three groups by age: Beehives (12 and 13), MiaMaids (14 and 15), Laurels (16-18). The upper age is flexible. For instance, if a girl turns 18 while she is still in high school, she can either remain in Laurels until the school year is over, or even until she goes away to college at the end of summer. Or, she can move into the adult women's organization called Relief Society. Over the four years I served, both of those options were employed by various young women.

Within Young Women I served in three different roles. First, I was MiaMaid** advisor for a year. After that I was Personal Progress advisor for a year. Personal Progress is set of achievements each young woman does over her time in YW. It is not something that can be done in a few months, or even a year. Some girls take all six years to finish. My last two years in YW was spent as Beehive advisor.

Serving in YW was a blast.  One night a week we met for an activity. The activities ranged from cooking meals to deliver to ill people, going to a local corn maze / pumpkin patch around Halloween, learning to decorate Ukrainian Easter eggs, Christmas caroling, sewing pads for the Days For Girls project, visiting our state's Vietnam Memorial, and so on.  On Sundays I taught a spiritually oriented lesson each week out of the YW manual. Usually the three groups within YW were taught separately by their adult advisor; about once a month we combined into one group.

Every so often we are assigned a new calling, and after four years in YW, I was given a calling to teach the youngest children in the ward in Nursery. Nursery runs for about an hour and 45 minutes during the time that adults are in the adult meetings and children above age three are in Primary. Our Nursery children run from 18 months to age three. New callings are announced over the pulpit on Sundays. After it was said that I was switching from YW to Nursery, some of the girls I taught came up to me for a big hug and a thank you. How sweet, that they thought to do that!

Our Nursery is very small--we have three children who come every week, and a fourth who comes occasionally. It's a lot of fun to be with these little ones. I switch off teaching a very short lesson with another gal, who I have known for 20 years. We often give the lesson twice during Nursery time, for reinforcement, and the rest of the time is spent singing songs and playing. The little ones learn how to sit and listen, and how to play cooperatively with other children.

There are many other callings in each ward, and the two above are some of my favorites! 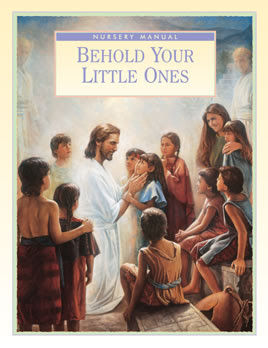 **Yes, YW class titles sound unusual, or even odd. The name MiaMaids is derived from the 19th century name of the youth organization: Mutual Improvement Association. Beehives are so named because the beehive symbol was adopted by the 19th century settlers in Utah Territory, representing the focus of achieving something very important by working together. Laurels I'm not entirely sure of, but I suppose the name is given to the older girls because it represents honor, and achievement.
Posted by Suzanne Bubnash at 7:51 AM

Labels: Blessings, The Church of Jesus Christ of Latter-day Saints