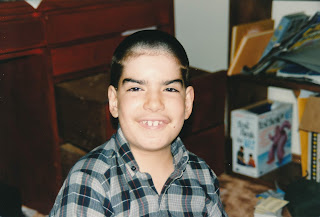 Over the decades a multitude of family, friends, acquaintances and strangers have extended themselves to look out for our son, D. He was born with a rare congenital disability called Cornelia de Lange Syndrome (CdLS), and though he is mild on the scale of the syndrome, he is daily in need of assistance, understanding and broad TLC.

I decided that for his 40th birthday we would invite over all those we could think of who know him and serve him. Unfortunately, the multitude of strangers who have stepped up to help him over the years are unknown to me--the ones who scrape him off the sidewalk when he has had a seizure, or make sure he stays safe when he is confused. I trust they have been blessed for their service to a stranger.

We held the party in our backyard with about 75 people who came to enjoy refreshments and good company. Others sent card or email wishes. The evening was happy and successful for all except D. One of the common features of CdLS is epilepsy, and on the day of his party he had three seizures before it began, and one more smack in the middle of it. Epilepsy is one big question mark as seizures strike unpredictably. Other challenges that accompany CdLS are autism, reflux, behavior issues, and the need for occupational--physical--speech therapy, all of which were part of our lives for many years. We never heard of autism until he was about 20 years old and (forgive me parents of autistic children, no offense intended) I've since thought that if I only had to deal with that one thing, life would be comparatively breezy.

The day D was born marked a huge change in our lives, though it was a while before we really comprehended that. Because CdLS is rare, he was not diagnosed until he was five and a half years old. During those years he spent a boatload of time at the doctor and hospital. So many things were wrong and sometimes it appeared he was wasting away toward death. On his first birthday he weighed all of 13 pounds. The worst part was that a few doctors thought his condition was my fault. Those few insinuated that I must be under-feeding him, or did a prodigious amount of drinking or dope smoking during D's pregnancy.

The day he was born I woke up having contractions and figured it was false labor, as he was not due for over five weeks. I did some laundry and the labor did not go away. I took my oldest next door to Vicki's to be watched during my regular weekly doc appointment. She had friends there, and as I stood at the door a major contraction slammed me and I doubled over. Friend Lois witnessed it and insisted on driving me to the doc. When we arrived the waiting room was crowded, and yikes, the doc was over at the hospital saddled with two deliveries. So we waited. And waited.

Labor became intense. The nurse was sure it was Braxton-Hicks labor. Lois held my hand as we sat there for two hours until the doc returned. I was taken in first because of my condition. He did a quick check and ordered me to not even breathe because I was about to have a baby. Lois pushed me in a wheelchair across the courtyard to the hospital. Lo and behold, there was a good friend of ours who worked with C, standing at the check-in. He dashed for his car to go fetch C from work. In the delivery room there wasn't time for any niceties. D was born not breathing and the pediatrician flew into the room to save him. C showed up a few minutes later. It was a relief to hear D finally cry.

For some years I had to fight for services for D. It was frustrating that he was labeled "failure to thrive" (the catchall term used when something is very wrong but there is no diagnosis). Shame on me, but I remember being jealous of my friend whose Down Syndrome baby was accepted for therapy immediately, because: Down Syndrome. D was acutely debilitated, yet in the 70s and 80s services were almost unavailable for a child with an ambiguous problem.

Eventually he was accepted into a therapy program, but until then I was a swimmer floundering in the deep. Life rings were in view all around, yet I nearly drowned before permission was given for someone toss one to me. Now it is recognized that disabled children must received services immediately, no matter the cause. No parent has to go begging and pleading for help, thank goodness!

Well, decades have passed with their ups and downs. D is thriving. He attends a weekly activity program for disabled adults. He volunteers at the library. He spends a day a week at our son's house helping with projects, walking the dog, attending Cub Scouts with his nephew. Our local bus service  takes him pretty much where he needs to go. D has a flourishing bottle and can business supported by neighbors all around (returnables are worth 10 cents here!).

In the quarterly periodical sent out by the CdLS Foundation I read a parent's story about his seriously disabled child. After summing up the challenges the family faced, he concluded by expressing his deep love for his child, and said something like, "I just don't know how we could live without him." Yup, my sentiments exactly!

Posted by Suzanne Bubnash at 4:55 PM