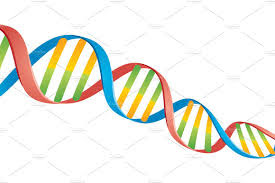 I recently gave a presentation on DNA testing to a community group. We discussed the types of DNA testing available (MtDNA, Y-DNA, Autosomal DNA) and then using the illustration below, I clarified for the group how DNA is passed down through generations.

There is a general misunderstanding that when siblings are children of the same parents, the sibling's DNA will be identical. When it is not (which is always, except for identical twins), some are convinced there has been a testing error. Another incorrect assumption is that because one has traced their ancestry on paper (through research) to particular places, and the DNA results don't match it exactly, the "science" must be bunk. In other words, "the company makes up DNA results just to collect my $99!!" Holy cow, social media teems with posts blasting the accuracy of DNA tests for the above reasons. But DNA is science, and science is real.

Let's look at the chart below which is from the Ancestry website. It's an ingenious way to explain how DNA passes down. First fact to know is that each child receives 50% of their DNA from their father, and 50% from their mother. Second fact: the parts of each parents' DNA that pass to their children are utterly random. You can see below that Edward received half of his DNA from each parent, represented by alphabet letters. Certain characteristics and features of each parent are contained in the DNA he has received. Other parts of one or the other parents' DNA did not pass to him. Same with Edward's wife, Angela. 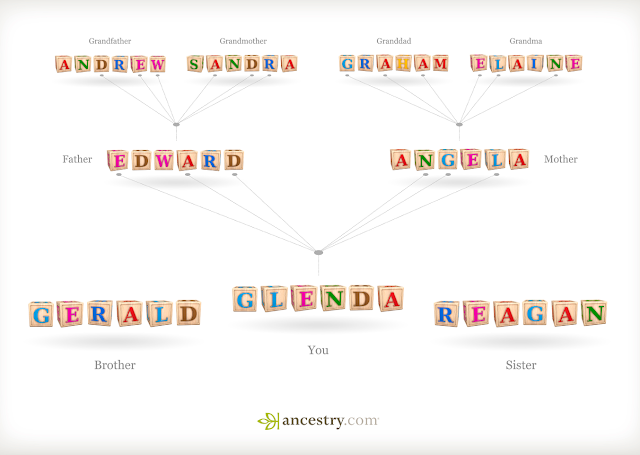 Angela and Edward's children receive half of each of their parents' DNA, but as you can see, each child does not receive the same pieces. The children might resemble each other or share similar characteristics, and they will also have major differences. If the letter "N" represents perfect pitch, Glenda and Reagan will be musically gifted, while Gerald will struggle to carry a tune. Of course, this is a simplification.

Because Generation A's DNA is halved for their children--Generation B--and Generation B's DNA is halved for their children--Generation C, and so on, one could be only four or five generations removed from an ancestor and not receive any of their DNA. Some have become upset because their test doesn't show the Native American or some other ethnicity that they have been told about their entire lives. Even if you truly descend from Native Americans, it is reasonable that you might not have scientific evidence of it.

Some who have already researched their family back to say, France, are puzzled or distressed that they have only a small percentage of DNA from that area. They are convinced the test can't be correct. It's important to understand that because someone lives in a geographical area, it does not mean that their ethnicity is rooted in that place, and is the same as a neighbor's. Contrary to popular social myth, people did move around a lot in the past. If an ancestor lived in Paris, that does not make them ethnic French.

Though we understand nationality pretty well, it is not the defining characteristic of a person. Do we understand ethnicity? Ethnicity is what is in our blood, and what a DNA test reflects.

Rather than being bound by political borders (nationality), ethnicity is defined by language, culture, ancestry and even religion. My grandparents' nationality was Austro-Hungarian, later called Czechoslovakian after the establishment of that country. But their ethnicity was Carpatho-Rusyn, closely related to Ukrainian. Their native language was not Czech, Slovak, German or Hungarian, but Carpatho-Rusyn. Their ancestors had migrated southwest from Kiev, and their religion was Byzantine Catholic rather than Roman Catholic, as were their Slovak and Hungarian neighbors.

As time marches on, DNA testing for personal discovery purposes will become further refined. Perhaps eventually it will hone in on the time periods a person's DNA is found in a particular place, and become even more geographically exact. I would love to see more migration patterns delineated. The science is advancing rapidly. This knowledge could actually be displayed in the not distant future.