This summer we watched two jousting tournaments in Turku! One was a free demonstration in a field by Turku Castle. A large area was roped off so spectators could sit on the grass around the ropes. The wood lances used were constructed with perforations every few inches. They were meant to snap on impact rather than impale and harm an oncoming rider.

The second jousting show was in an arena at the Medieval Market, an annual event held between the cathedral and the Aura River. We bought tickets and found good seats on the bleachers. The woman in the first photo was sort of an emcee, the person who told the story of the knights and ladies who acted out the scenes. Naturally, there was a bad guy and a good guy.

The horsemanship displayed was fantastic. The beasts were in tune with their riders, could stop and twirl on a dime, and they didn't seem to fear the lances.

All of these photos are from the paid show inside the arena. 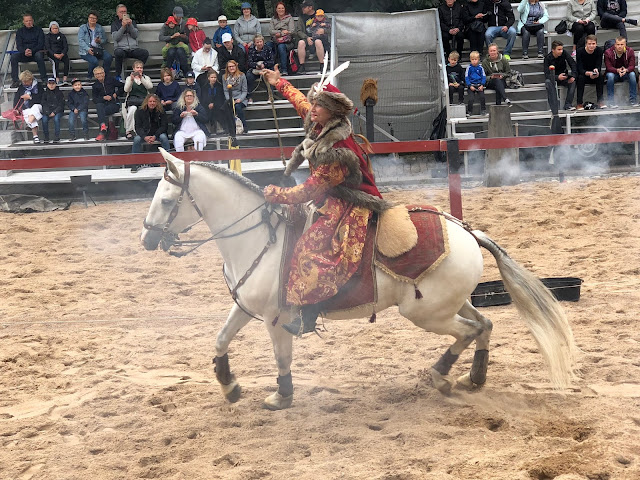 The show began with a parade of knights and their horses. The caparisons (horse's sheeting) was stunning. These are heavy duty horses! They must be bred special to carry an armored knight. The armor is genuine.  Notice their shields are concave to catch the point of the lance to prevent injury. 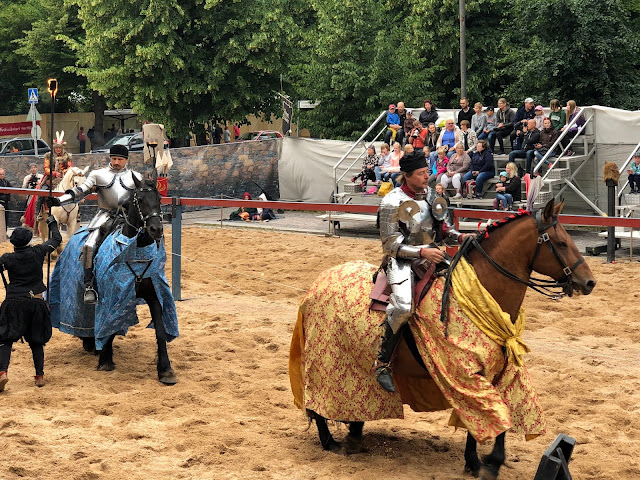 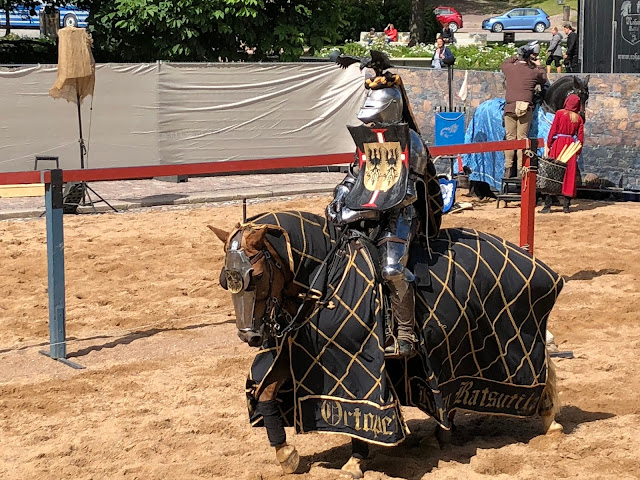 I have no photos of the actual jousting. But uh-oh. This knight was unseated from his horse and very hurt. He was on the ground for a while. Eventually his helpers removed the armor piece by piece, and all of the under-lying padding. He was helped to his feet and was able to hobble off the field. An ambulance was standing by. Later on it was announced he had a separated shoulder and a few other injuries. 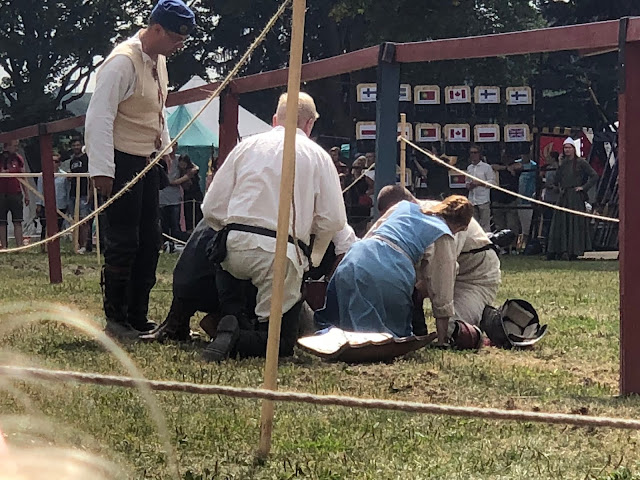 After the show the knights and ladies stayed around to talk to the spectators, answer questions, and show off their period clothing and gorgeous mounts. 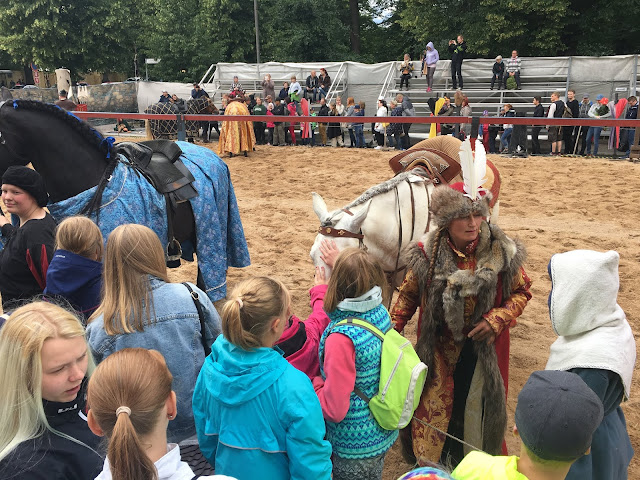 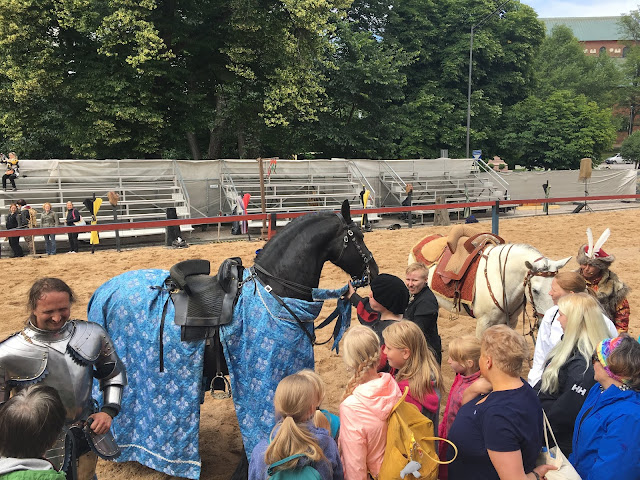 If it appears this knight is drowning in sweat, he was. What a hot summer Finland had. He is probably suffering terribly in that heavy armor. 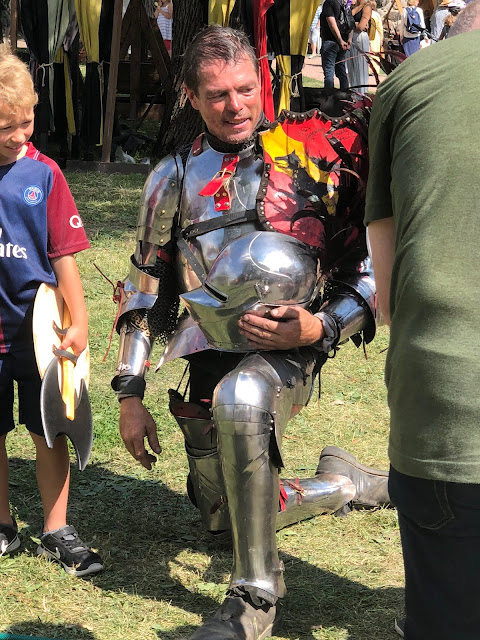 The beautiful standards were displayed near the tents where the participants camped out. 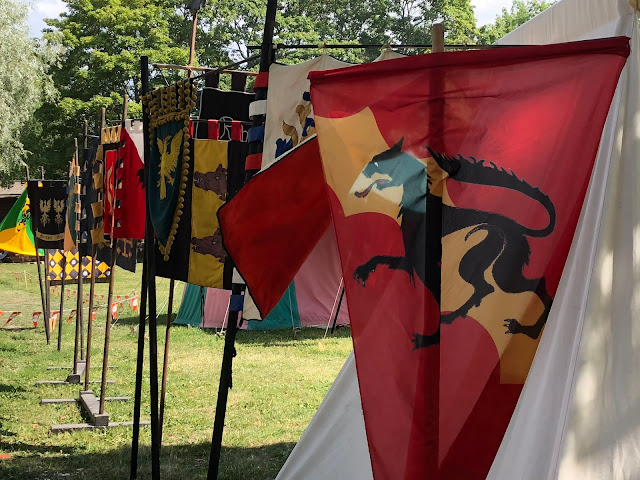 The medieval Turku Castle provided the backdrop for the demonstration tournament. 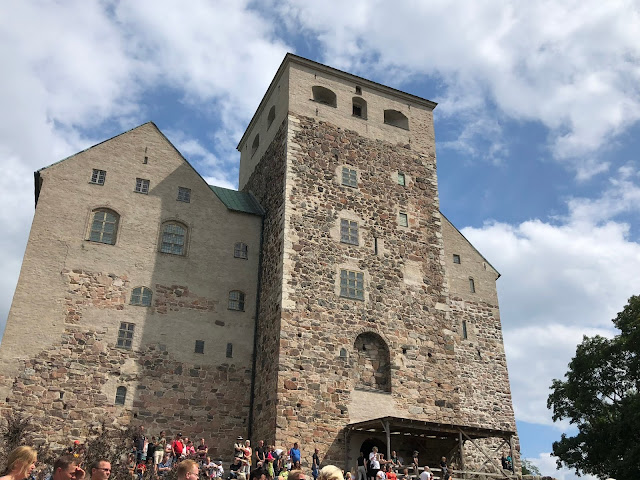