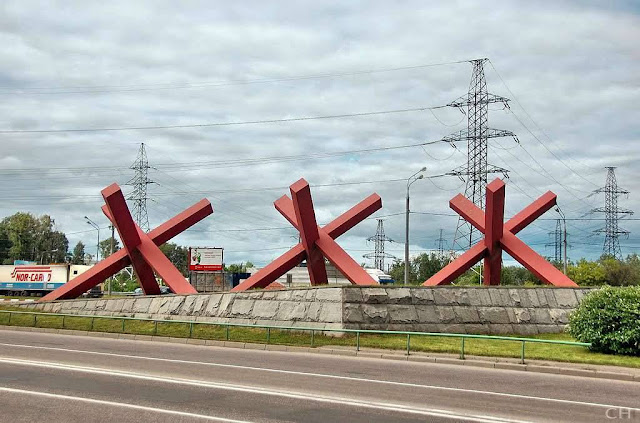 If you land at Shermetyevo Airport in Moscow, Russia and travel into the city, your route will take in the above monument.

The symbolic crimson-colored defensive barriers, called hedgehogs, mark the spot where the Soviet Red Army stopped Hitler's war-machine at the "gates" of Moscow, in December 1941. Axis forces had bulldozed their way north through the Soviet Union with several million soldiers, a movement known as Operation Barbarossa. Their ultimate goal was to acquire natural and agricultural resources to fuel their army, and to depopulate the western Soviet Union in order to re-people it with Germans.

By the time the Axis came within sight of Moscow in late 1941, winter was setting in. The bitter temperatures and heavy snow grounded the Luftwaffe and drastically curtailed the Axis movements. The Soviet counter-offensive drove them back from Moscow; the Axis never came close to taking the city thereafter.

The hedgehogs are ever a reminder of the firm, heroic stand made by Soviet troops. During five years of war, over 25 million Soviets, military and civilians, lost their lives, about 14 million of them Russians. Thanks to the Soviet people for stopping the German advance, the German bullets, with their own bodies.

In the Museum of the Great Patriotic War in Moscow is a special room that memorializes the dead. This solemn Hall of Remembrance and Sorrow shows a mother with her dead son, encompassed by "tears" falling from above. Perhaps at least one tear falls for each of the many millions whose lives were snuffed out by war. Add to that the tears shed by countless subdued visitors, and you have the most effective war memorial possible. If only tears could end war forever. 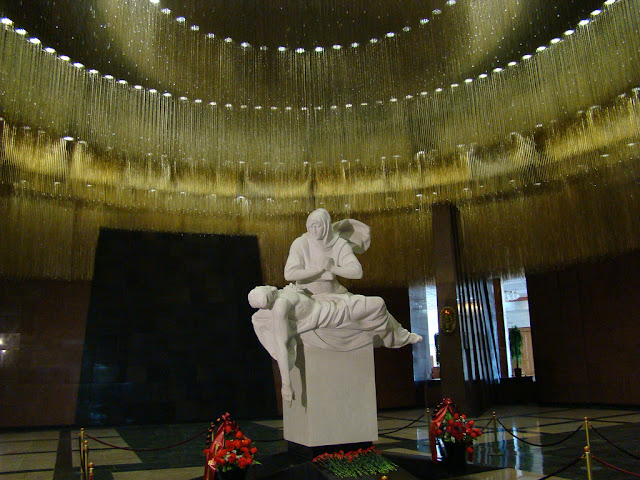