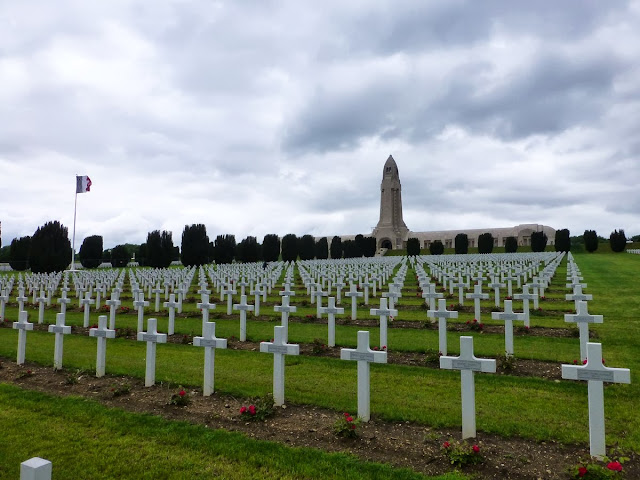 cemetery and ossuary at Verdun, France, site of a ferocious ten-month battle in 1916

100 years. The "war to end all wars" officially ended 100 years ago today, at the eleventh hour on the eleventh day of the eleventh month. The Great War, as it was known then, erased the lives of 10 millions soldiers, maimed twice that, killed untold numbers of civilians, and broke up the Austro-Hungarian and Ottoman Empires, thus changing the world map and ushering in modern nations. 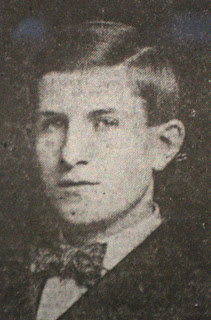 Grandpa's cousin, Pvt. John F. Brosnahan, was drafted at age 30, a year before the end of the war. 5 feet 8 inches, blue eyes, brown hair, oldest child of Irish  immigrants. In mid-August 1918 American forces faced the Germans at Fismes France, Pvt. Brosnahan among them. Germany held the advantage by entrenching on the wooded hillsides. With a clear view of the American lines, shells hit their targets effectively.

In spite of the horrid conditions mentioned above, John's last letter home to his mother, Catherine, on August 3 1918, was upbeat with no complaints. A warrior didn't grumble to his mother. He was in perfect health, he said, and then, "The soldier's life is a great life."

Pvt. Brosnahan, Company I 306 Infantry, was the victim of shell-fire on August 19 1918. He is buried in the American Cemetery at Fismes. Captain Earl Marshall wrote to Catherine:


Madam:--In behalf of the officers and men of Company I, 306th Infantry, American E.F., I wish to express our deep sympathy with you in the death of your son, Private (first class) John F. Brosnahan.  He died in action on the morning of the 19th instant, being apparently killed instantly by the explosion of a shell.

He was a very valuable member of the company, being especially cool and useful at the front.  He was much liked.

Believe me madam.  Yours very truly,