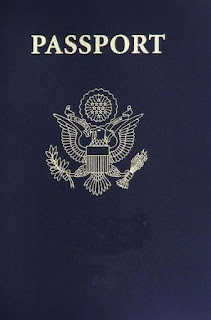 In the summer of 1976 Craig and I miraculously got a chance to spend the summer in Europe--how that happened would take another post, but it was remarkable because we were poorer than church mice. We had both graduated from BYU and Craig would be continuing his Masters Degree in the fall. Our first baby was due October 1.

We both needed passports and to save money in those days, the government offered joint passports, where two people could be on the same one. Your photo had to appear together. A neighbor took our picture. The drawback was that the two people had to travel together, which for us wasn't going to be too hard since it was a "second honeymoon before the baby comes" situation.

All went well for 99% of the two months we were in Europe. We each carried a frame backpack and sleeping bag as we traveled three weeks by train through the British Isles. On the continent we spent most of our time at Craig's brother Barry's house in Germany. A few times we borrowed his car to travel elsewhere. Near the end of our stay more of Craig's family arrived and for about ten days Barry took us all in his very crowded VW van on a camping trip to southern Germany and Austria.

Our flight home in mid-August was Amsterdam--Bangor Maine--Los Angeles. Barry and the gang decided to take us to Amsterdam to make a little vacation there, and do the service of dropping us at Schipol airport. We bid our goodbyes, the gang left to go museum hopping, and we approached the check-in counter. At that point our joint passport was nowhere to be found. We stepped out of line to tear through every single bag, pocket, fold, etc. but it had vanished. The airline folks had no problem letting us on the plane but they couldn't guarantee what the US would do when we arrived with no passport. "They'll probably put you right back on the plane to Amsterdam," was their best guess. 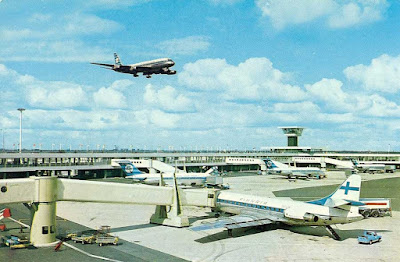 What a nervewracking flight home it was. Would be be turned away? Jailed as spies? I thought back to stories about people without passports who end up living the rest of their lives in limbo in an airport. How would that work with a newborn?  We told our story to seat-mates and it spread around the plane so by arrival time all passengers knew what was up.

On arrival in Bangor all eyes were upon us as our names were called to step off the plane first. We were ushered into an immigration office. A very nice man asked us to explain ourselves. When it was time for him to pronounce his decision I'm sure I was visibly wincing. Would the verdict be to send us back to Europe, or to pay hundreds of dollars we did not have? "We're fining you $25 for entering the country illegally." To a pauper $25 was a princely sum, but honestly, even at that moment it seemed the best bargain ever. We could breath again and I felt like kissing the ground of the good ol' USA. It was so great to be back!

Later we received our passport in a letter from Barry saying he found it on the dashboard, raced back to the airport, and learned our plane had just departed. But we were perfectly satisfied with our happy ending.
Posted by Suzanne Bubnash at 7:30 AM