The Most Embarrassing Tourist Moment Ever 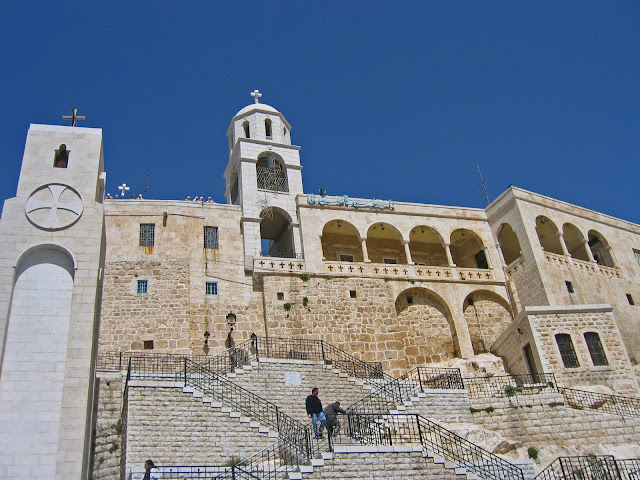 I’ve traveled to many countries over the last four decades and have done my best to blend in, discover, enjoy, and empathize, and, AND to avoid giving American tourists a bad name. This is a post about the one time (albeit unintentionally) that I did insult our hosts and probably became the poster child for bad American tourist behavior. This experience doesn’t pertain to obnoxious clothing, insufferable conduct, or put downs of another culture. What have I left out? Oh yeah, cell phone etiquette.

One day four of us set off from Bridget and Jeremy’s place in Damascus, Syria, to go to the Christian Monastery at Seidnayya. As we left, Bridget thought to loan us her cell phone so that in case of any kind of problem we could call Jeremy for help. I said, “Is it shut off?” She said, “yes.” I looked at it and there was no screen display (in mine the screen would be lit if on) so I took her word for it.

Seidnayya Monastery has been a place of worship for 1400 years, but the current buildings are mostly from the 19th century. There are two things that make it unusual: one, it is a destination for Muslim as well as Christian patrons, and two, its most sacred shrine is centered around a portrait of the Virgin Mary, reportedly painted by St. Luke. This shrine is a most holy place. It is a tiny room with no natural light, the black-draped walls of which are adorned with tributes from worshippers who have come there to beg for a blessing. The painting of Mary is not visible—it is hidden behind the folds of ebony cloth. But it must be there, because hundreds come to light candles, to prostrate themselves before it, to implore God for a child or some other miracle. Sounds of muffled weeping and chanting emanating from unseen pilgrims resonate through the inky blackness.

All I could do was stand there quietly in the back with arms folded, in awe of the devotion before me. Until I was disturbed by the chirping of . . . a cell phone! What! Who in their right mind would bring a cell phone in a place like this, let alone keep it on! Everyone was startled and the pilgrims were disturbed. Steven whispered, “the ring is coming from your backpack!” Oh my, was I ever mortified. I squeezed out of the shrine and ran this way and that way down long stone corridors until out of view, and out of earshot of anyone who had been worshipping. I was shoeless, because all pilgrims remove footwear. I was embarrassed and mortified at having disturbed the devoted’s most humble pleas.

The call was from Bridget just to check on us. Eventually Steven found me and delivered me my shoes and we steered clear of the shrine the rest of the day. Because it had been dark inside, I  am sure no one recognized me as the crass American who brought their cell phone into the sacred shrine of Seidnayya.
Posted by Suzanne Bubnash at 7:30 AM