On the evening of February 8, 1971, our family engaged in our usual weeknight activities. Some of us had homework; I studied for a dreaded chemistry test. Dad watched something on television and Mom read a book in her favorite spot on the couch. Just before heading for bed, Dad removed the empty Sparklett’s five-gallon glass water bottle off the water cooler, then loaded on a new bottle. We all hit the hay, but little did we know that our lives were about to be disrupted in a way we couldn't have expected.

5:59 a.m. Tuesday morning. Talk about a rude awakening! The monstrous roar of the ripping earth startled me awake just as the shaking began. The noise was akin to jet planes accelerating in our front yard and I was momentarily petrified. The fleeting thought crossed my mind that yes indeed, California is sinking into the ocean. My room reeled and rolled like a rodeo bronc. I wanted to bolt for safety--my room was on the first floor and I didn't want to be squashed by a falling ceiling--but the best I could do was slide out of my bed onto all fours and claw my way over the other twin bed towards the door. On my way over, the hutch flew off the dresser onto the bed, cutting my leg. The shrieking of other family members compounded my terror. The sound of smashing glass gave the impression the whole house was about to come down. When I made it to my door, in the dark I could see the rest of the family hanging onto each other and gripping the stair railing as they frantically half-slid down to the first floor. Mom was alarmed for in the dimness she saw a motionless figure prone on the front hall tile, which turned out to be, not an injured child, but the artificial tree that was ordinarily in standing position near the staircase. As the shaking subsided we all hugged at the bottom of the stairs.

We collected ourselves then toured the damage. The kitchen was in chaos. All of the cabinets and the refrigerator had opened up, spilling and mixing food with broken dishes and glass on the floor. Added to that was the five gallons of Sparklett’s water, creating an unappetizing soupy stew to clean up. Gradually neighbors began to come out to compare damage. In our immediate area the most common problem was cracks in the walls and in the brick chimneys, and fallen or leaning exterior stone fences, all of which our house had. This quake, called the Sylmar quake, was a 6.6, not a world class shake at all.  But it lasted a lengthy 59 seconds. There were about seventy deaths, most due to the collapse of freeway bridges and a couple of hospitals. We were without power and phone but we still had our well water.

It took the better part of the day to clean up the mess. There was a moment of comic relief when our dog helped herself to leftovers that had been ejected from the fridge. School was canceled for the rest of the week. I heard the chemistry lab suffered serious damage, and on the bright side of the earthquake, my chem test was postponed, which gave me more time to get a grip on the material (not that it helped). The grocery stores had a major job cleaning up their broken glass and damaged products. Some houses in Newhall were knocked off their foundations or partly destroyed. Dramatic destruction occurred at the freeway interchange in Newhall Pass. The sweeping concrete curves sailing above I-5 were sliced in half, the fallen portion smashing onto the freeway underneath. Mangled rusty tentacles of re-bar poked out from the debris like ghastly fingers grasping for help. (Almost identical damage occurred here in the 1994 quake). Further down near San Fernando two commuters died when an overpass fell on their pickup, leaving it a flattened 18 inches high.


Newhall Pass after the quake 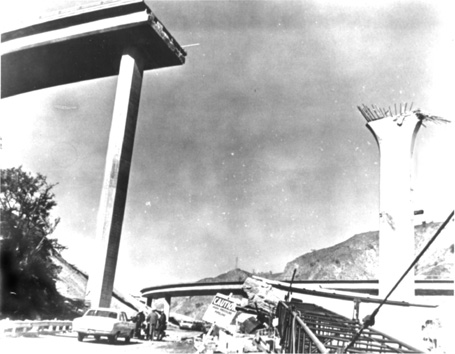 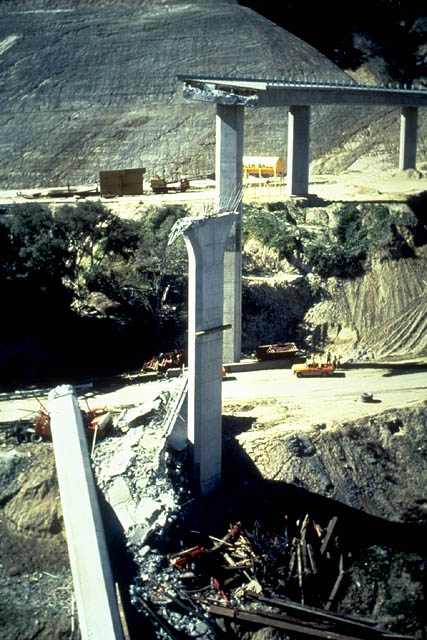 Tomorrow: Recovery
Posted by Suzanne Bubnash at 7:30 AM