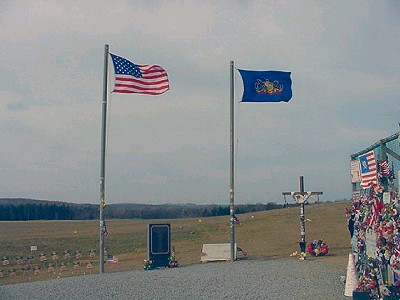 Y’all know what happened here on September 11, 2001. It was a bright spot in an otherwise unimaginably terrible day—that is if you can call it a bright spot that 40 people fought the terrorists, and then hurtled to their deaths at such great speed that there wasn’t much left of them or the plane either. You know what I’m talking about though.

About a year after 9/11 Steven and I visited my folks at their home in Belle Vernon PA, about an hour drive from the Flight 93 crash site. In fact, Flight 93 had flown to its fate not too far north of their house. My Dad decided to take us over there on a wintry November day. As often happened on a George Bubnash outing, we took country roads instead of the highway towards Somerset, PA, the nearest city to the site. The hoarfrost on the trees was cracking branches everywhere. It was a magically, frosty, pretty day.

From Somerset you drive north on country roads to the site. I don’t know if Pennsylvania has a corner on unmarked windy country roads, making places difficult to find, but they do a good job at it. I’ve had the experience of taking an hour to find a place three miles away. Even locals get lost sometimes. It was the same this day. Kind folks in the Somerset area though, had created these little red-white-blue markers that simply said “Flight 93” with an arrow pointing either straight or right or left. We followed those for a while but a few were missing so it was a while before I spotted the place on a hill near a farmhouse.

The hill is where the makeshift memorial is located. The crash site is in a draw in the valley below, maybe a mile away. The hand of God laid this plane down in a peaceful site away from houses and buildings. They say this was once an open-pit coal mine so that when the plane hit, it was instantly swallowed up. Down in the draw at the center of the site is a solitary American flag marking the spot. I like that. It’s a simple symbol that says much. The makeshift memorial contains homemade markers and messages received from the world over, and also some metal and stone plaques sent by other countries. You can leave a souvenir there or write a message in permanent marker on the guard rail.

I was just reading on the internet about the National Park Service memorial that will be ready for dedication in two years. It has various features that symbolize what happened on Flight 93. The site is largely outdoors. I like that. But perhaps it’s overdone. The reference below contains the drawings and descriptions of the various aspects of the memorial. The bowl with the walkway around it seems enough (minimal can convey peace). I don’t know if the concrete walls add anything—perhaps I’ll change my mind when I see it. But there is one thing that bugs and I will take the flak of being called unfeeling. There is private access for the “Flight 93 families” in the area that is basically a graveyard. I’m not sure why that is. When we go to Pearl Harbor or Gettsyburg or Flanders Fields, or any number of places where people have fought and died, we remember that they did it for their country. And so their country comes to pay them honor. In my book it's odd to be exclusive at this memorial.