Four Things Past Their Prime

We all have 'old favorites' around the house that would be trash to others.  Here's a few of my favorites:

Crock Pot--in 1977, fresh out of college, we moved to Ridgecrest California.  We didn't have much, and we  even lacked normal equipment essential in a kitchen.  During a conversation one day a gal in my ward, Vera Todd, picked up that I did not own a crock pot.  She had two.  She showed up with the extra one for me to keep.   Here it is in all its glory, the Simmer-On II.  Yes they make better more versatile crock-pots now.  This one still works well and the bonus is that I think of Vera every time I use it.  And try to be more like her. 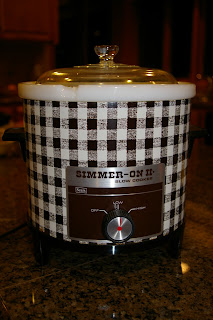 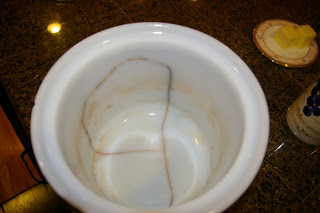 Cinnamon Shaker--Don't know where or when my Mom got this dandy little shaker, but I grew up with it.  We liked cinnamon toast and this is what we used as a shaker for as long as I can remember.  It still does the job and rustles up memories every time. 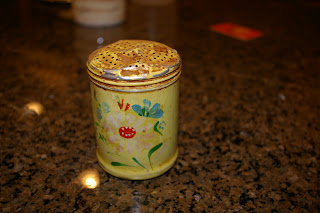 Tiger Cup--Craig took Teresa to the Barnum and Bailey Circus in Portland when she was about 4.  That would be 1989.  She brought home this cup which I adopted as my water cup.  I like the handle, the thick base that keeps it stable, and the capacity is just about right.  About 5 years ago it cracked down the side and formed a small hole, but as long as I periodically refill the hole with rubber cement it doesn't leak on me. 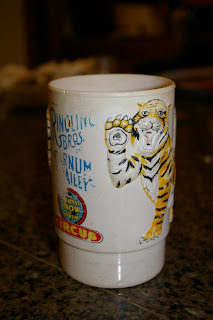 Mom's Jacket--When Mom died in 1994 my sisters and I went through her clothes.  We helped ourselves to a few things before donating the rest.  I brought home this snazzy "jogging" jacket and  pants.  The pants eventually gave up the ghost but the jacket still lives, and I enjoy thinking about Mom when I wear it.  Its most redeeming feature is that it's a very thin shell, which is all I need most of the time on exercise walks.  Anything heavier makes me sweat too much.  I know it makes me look like a relic from the 80s but I don't care. 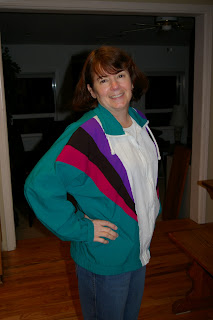