One of our granddaughters has the Arabic name, Majd.  When we visited her in October she was barely 2 years old.  Yet she has a command of language that surpasses that age.  At times I couldn't help laughing at our conversations, because you don't expect a young child to say certain things.

She was playing with a set of 3 cheap dolls that happen to have wings.  I asked her, "Majd, where are your dolls?"  She vehemently replied, "They're not dolls.  They're fairies."

I asked her if she would like to visit me at my house.  She cheerfully blurted out, "Do you have toys?"  And after a pause, "Do you have kids???"

If I teased her by calling her 'be-be' she became very serious and said, "No!  I called Majd!"

When she was eating a piece of bread I broke off a corner and put it in my mouth.   Sternly and in a huff she said, "You ruined it!!"  And marched away with her bread.

The day before my departure I wanted to prepare her, so I explained that tomorrow I would be going home on an airplane.  She became genuinely solemn and declared, "I'm sad."   I wasn't even sure she would understand what I meant, but she did and it made her sad.

Majd also narrates her life continually.  While awake she is constantly talking, describing everything she is doing.  At dinner, "I put pasta in my mouth."   Changing clothes, "I take off my dress."  And so on.  And on.

Majd is a little firecracker, a little imp.  She is enthusiastic about life and  it's catching.  One day we got off the ferris wheel at the Casbah and immediately she darted out of our presence to where she could get a good view of the fair.  She sucked in her breath and jumped up and down at the sight.  It was then I realized what a beautiful sight it was with all the lights, the boats on the creek, etc.  She garners attention by intentionally being naughty, as when she takes her arms out of her car-seat straps and makes sure we all know about it. She knows how to have fun! 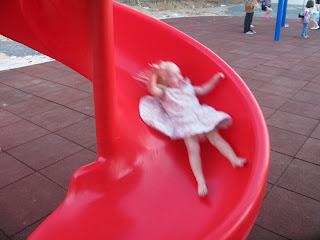 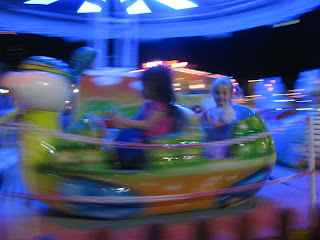 fun at the Casbah
She is queen of the souk.  Every visit she is mobbed by shopkeepers who want to hold her, hug her and bestow a gift on her.  One day 3 different shopkeepers gifted her.  Two gave her tiny bracelets which they bothered to resize for her and the other gave her a little plastic bell which she called "my pretty fragile thing." 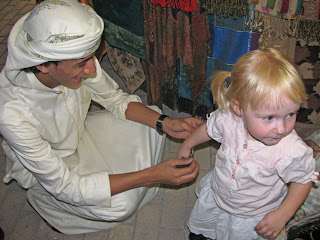 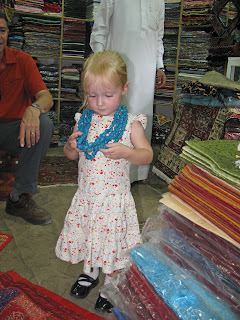 The storekeeper did not give her this more expensive necklace but let her wear it until we left!
Posted by Suzanne Bubnash at 7:00 AM