She Really is One Tough Mother

85-year-old Gert Boyle is the ad front for her company, Columbia Sportswear, whose headquarters are two miles from our house. She is billed as "head mother" and "one tough mother." Their employee store displays some of the most popular ads featuring Gert, including this one: 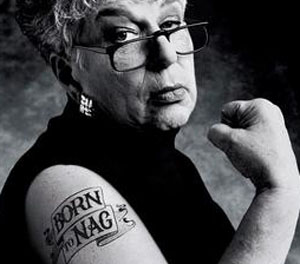 One ad campaign says "Before it passes Mother Nature, it has to pass Mother Boyle." Another says,

“She’ll gladly retire when hell freezes over, but that’s when we’ll need her most." And here's a video link to a TV commercial.

She's noted for her witty remarks. Says Gert: "One morning I had a guy call and he said, “I want to talk to the president of the company.” I said, “Speaking.” He said, “You’re a woman.” And I said, “You know, when I got up this morning, I noticed that.”

Gert's family fled Nazi Germany in 1939 when she was 13. Her father bought a hat company in Portland and renamed it Columbia. Gert's husband later became head of the company, but when he died suddenly in 1970 she and her 21-year-old son rescued the company from bankruptcy. It is now a multi-billion dollar company, largely because the Walkers can't stop buying Columbia Sportswear. It's the perfect clothing for our active selves and PDX wet, cool weather and we get it at employee prices so close to home!

Anyway, a few days ago she arrived at her home in West Linn and came face to face with an intruder and his gun. She cooly told him she needed to disable the alarm, but it was a ruse to get to the 'cop button.'  He tied her up, the cops came, he was apprehended. Two others were arrested later; turns out this was a conspiracy to kidnap Gert for ransom. According to www.kgw.com, "Boyle had enough composure to dress down the West Linn police chief when he visited to brief her on the investigation. He mistakenly wore a North Face jacket, and he asked her how she was doing. She said she was doing fine until that jacket walked through the door.""

Gert is back at work. 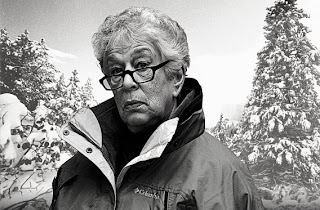