A Funeral, a Wedding, and a Scout Meeting

On Friday I attended 3 very divergent events.  All three were attended by some of the same people.

The first was the heartbreaking funeral of a young mother who died of cancer.  We stood at the grave site under dark skies.  The cold wind and rain seemed fitting until the service began.  The theme repeated by several speakers and prayers was the hope and gift of the resurrection.  The wonderful woman secure in the casket, whose physical self was wracked by cancer, will again be with her husband and baby.  The mood transformed giving way to optimism and hope in spite of the gloomy skies. 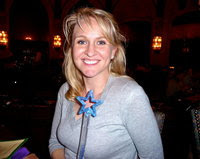 The wedding reception (wedding had occurred a few days before in Utah) was extra joyous because this nice young man in his 30s finally found a bride.  His family is thrilled.  The mother of the groom is the best friend of the mother-in-law of the deceased mentioned above.  Her gladness is tempered by her friend's grief. 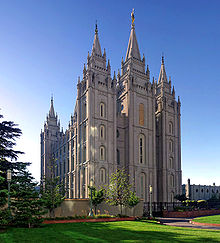 I left the reception to zip over to Cub Scout Pack Meeting.  My den was responsible for the flag ceremony, which we had not practiced.  We pulled it together.  The awards were given including the Whittling Chip card for two of the boys, one of whom specifically requested we earn it because he loves anything to do with knives or swords.  Two weeks ago at den meeting we spent a pleasant afternoon on the church front lawn carving shapes out of Ivory soap.

Life is a patchwork quilt.   Some patches are dark, dreary and mournful, others are eye-catchingly beautiful, and still others take their place quietly, a bridge between the two.   Sew them all together and you have a beautiful work of art. 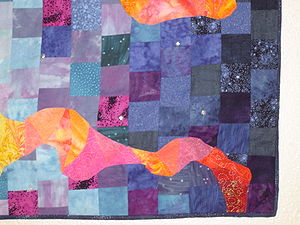 Posted by Suzanne Bubnash at 7:45 AM