The Blues Give Me the Blues (in winter)

The blue wall near La Grande

On Monday I drove home from Sugar City Idaho in one long 14-hour stretch, which included two quickie fill-ups and a good lunch at Cracker Barrel in Boise. Three of my grandchildren were with me; they had fun playing with their cousins, Sweetie and Little Miss Destructo (the latter will grow out of that stage someday). The drive to Sugar last week gave us dry clear roads; coming home: not so much. 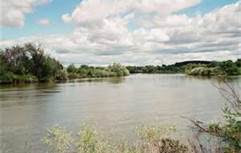 The Snake River near Ontario

The first flakes appeared as we crossed the Snake River into Ontario Oregon, and we saw a couple of state troopers heading into the foothills of the Blue Mountains. Mmmmm, either there's a wreck ahead or one of those nasty Blue-blizzards up there. Not too many miles later, we saw the semis, a hundred, and probably more, lined up on the right side chaining up. What a memorable sight!. The drivers and their helpers and some troopers were scurrying to get the big rigs set and on their way. The flakes were heavier now but there was not yet much build up on the road. 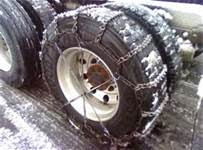 That changed quickly and as is usual in bad weather, I won first prize for slowest car on the road. We did the climb up the east side of the Blues and eventually a snowplow appeared ahead. I pulled in behind it and followed it for miles until the driver inexplicably left the road (a smoke? a pee?). It got more dicey then, driving on a snow floor over the summit. About the time we reached the rest stop on the west side of the summit, the snow vanished. I was grateful not to have to navigate down steep, windy Cabbage Hill on a snow floor. And that this was a relatively mild Blues-storm. 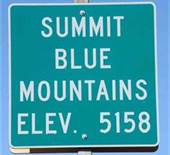 The beautiful Blues near Cabbage Hill (in summer!)

Cabbage Hill. Stairway to Heaven. Ladd Canyon. Mt. Emily. Deadman Pass. These are just a few of the picturesque locations in the Blue Mountains of Eastern Oregon. Pioneers from the 1840s on forced their wagons through here, and in a few places wagon ruts still exist. I can only imagine the crushing despair Oregon-bound travelers of old felt when, after already navigating 1700 miles of Great Plains and Rocky Mountains, suddenly faced what looked like an impenetrable blue wall so close to their destination. And now, we breeze over that wall even in the feathery whiteness (or wicked blizzard) of a winter snowstorm.

Posted by Suzanne Bubnash at 8:50 PM