A Bit of Grog, or How Mr. Sean Evans, Garage Man, Took Me on a Wild Goose Chase 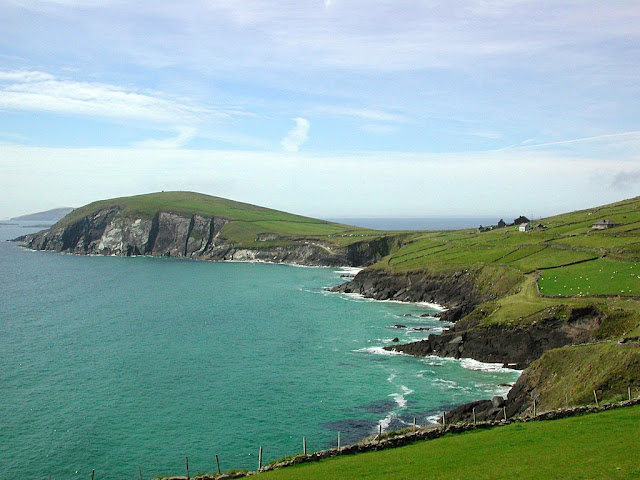 Curses on Budget rental cars. I'm like the battered victim who keeps coming back for more. In this case, I have rented and re-rented cars from Budget. Why? Because they're within my budget, ha. I already covered the East Coast Adventure involving a Budget disaster. And now, my international debacle.

In 1990 I landed at Shannon Airport in Ireland; my husband Craig would follow in a few days for a week of sight-seeing together. It's unnerving to step off a long international flight at 7 a.m. local time when your body tells you it's midnight-and-time-to-turn-in, then pick up a rental car to head out for a 3 hour drive to your ancestor's domicile: Dingle, County Kerry. Oh yeah, and you are driving on the "wrong" side of the road for the first time in your life!  That's a biggie.

My crystal ball smartly announced there was a potential serious problem in my future when the Budget counter handed me a bent key for the automatic compact car I had reserved. Yeah, the key was bent like a willow leaning from the wind. My mind's eye visualized me out on the remote Dingle Peninsula and not being able to get the key out of the ignition, or in, for that matter. I asked for a different key and the clerk informed me that was the only key for that car.  Really? You don't make copies of your keys?  Mmmm, who doesn't keep a spare car key? He insisted there was no other key, so I requested a different car. The only other cars were manuals, and I decided it wouldn't be smart to be managing a manual transmission when I was going to be driving on the "wrong" side for the first time. I took the automatic with the defective key. Bad choice.

The car was fine for 4 days as I jaunted around the Dingle Peninsula researching my Irish ancestors. On the 5th day, just before my zip up to Shannon Airport to pick up Craig, I stopped at a cemetery in Anascaul to look for O'Donnell gravestones. For some dumb reason I locked the car. Sheesh, I was out in the countryside a mile from civilization . . .  and I locked the car. After a soaking in a short squall, I went to unlock the car and, the key broke off in the door lock . . .

I hoofed the mile into Anascaul, the nearest town, ducked into a pub to ask for advice, and was told the only "garage-man" in town was across the way, Mr. Sean Evans. When he answered the door he told me was "just havin' me a bit of grog" and would be out in 15 minutes. The "havin' me a bit of grog" part was a red flag, but I had no choice but to engage him in solving my problem. 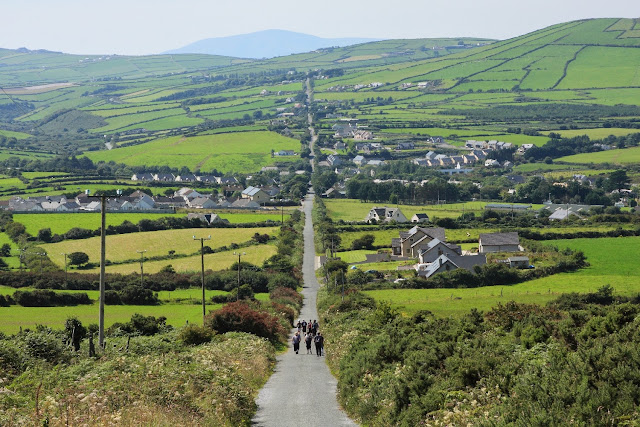 the emerald countryside near Annascaul

Long story short, grizzled Mr. Sean Evans thought by driving me back into Dingle town to the locksmith we could get the key fixed. It was then I realized he wasn't the sharpest tool in the shed. Apparently the locksmith already knew that--he declined to get involved any further than explaining the obvious to Evans: it's impossible to make a new key from 2 bent and broken pieces, even if he could get the piece out of the lock.

Dingle Harbor with St. Mary's Catholic Church in the background

After a couple of wasted hours w/ this not-too-bright and slightly tipsy garage man, we stopped at Mr. Sean Moran's garage in Dingle town where I explained our situation. And Mr. Sean Moran took charge. Over the phone he berated Budget in Shannon for sending me out with a defective key, and then handed the phone to me. I told them that when my husband landed that evening he was to be given a new rental car at no charge. Furthermore, their defective rental was sitting out in front of the Anascaul Catholic Cemetery, locked with the broken stub of the key in the car door (!), and they were welcome to come and get it at their convenience. And that is what happened. Craig was paged in the airport, received a new rental car, and met up with me the next day. We had a marvelous week together meeting my relatives and touring this most scenic spot in Ireland. We even took the St. Mary's Catholic Parish clerk (Padraig Lynch) on our day trip to Ballyferriter. He showed us amazing stuff that isn't in the tourist books. And as we passed Anascaul Cemetery on our way to the airport, Budget's troublesome car was gone. All turned out well! 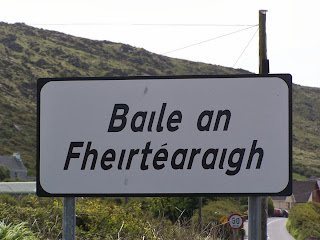 Ballyferriter is the westernmost point in Ireland, and in Europe; if you venture any further west you're in a boat on your way to America!