One Family in the Aftermath of An Gorta Mor

To relate the plight of the Catholic Irish during the famine to my own ancestors, meet my families: Toomeys, Dunns, Doyles, Sheas, Griffins, Ashes, Murphys, Sheehys, Sheehans, O'Sullivans, O'Donnells, O'Connors, Cavanaughs, Kennedys, Brosnahans and Wrens. Survivors of the famine from each of these families fled to the US either during or after the crisis. A few Ashes headed to Australia. All but the first two surnames are prevalent on County Kerry's Dingle Peninsula. There were no death or burial records kept in their 19th century parishes, so no way can we differentiate between those who died in the famine, and those who survived but remained in Ireland.

A few English landlords paid the Atlantic passage for their Irish Catholic tenants; others cleared the land and left the tenants to fend for themselves. They died in droves, meeting their end in roadside ditches, in the ruins of their cottages, and in workhouses. For decades after the famine years survival was precarious in Ireland, so in addition to the one million who died from the crop failure, Ireland bled another two million to foreign shores over the next 50 years.**  I have no idea how these famine survivors were able to scrape up passage money, except I do know my Doyle's story, and their method is typical of the 19th century Irish immigrant. 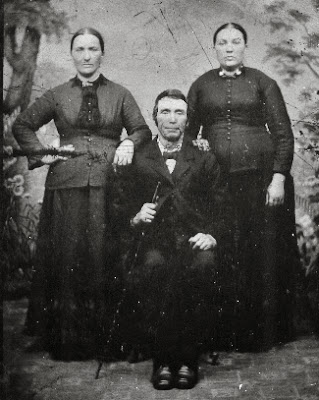 My great-great grandparents Tom Doyle and Mary Murphy, along with Mary's sister Catherine Murphy O'Connor (on the right); Tom is holding a shillelagh, an Irishman's walking stick

Tom Doyle and Mary Murphy of Ardamore Lispole left Ireland several decades after the famine, but distressing times had not gone away. Remember that most of the land in Ireland had been--and was still --owned by English absentee landlords. In the 1870s and 1880s there was widespread agitation over how and when to turn the land back to the natives, and there were localized famines occurring in various areas. The battered economy could not support the rebounding population. I know of one family who drew straws to see which members would have to emigrate.

The Doyles came up with money to send one of their nine children, Bridget Doyle, to the bustling mill city of Holyoke Massachusetts. She boarded there with "old country" friends already settled, and took up the long hours in a cotton mill. If you have seen the production North and South, think of my great-grandmother Bridget. After a time her saved wages paid for her sister Ellen to join her in the mill, and then on the 10th of May 1880, the rest of the Doyles arrived in New York on The City of Montreal, and made their way to Holyoke. 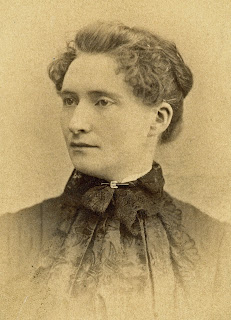 Thomas ran a saloon and also worked for the city digging ditches. As the story goes, his most prized possession was his shovel which he stored safely under his bed. His daughters treated it as if it were solid gold when they swept underneath the bed, because it was their bread and butter. Tom walked through Hampden Park in Holyoke on his way to work, and always genuflected at the tall statue of a patriotic Miss Liberty which he mistook for the Virgin Mary. 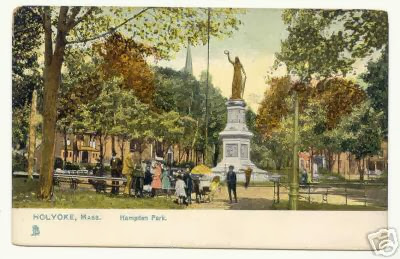 Mary Murphy Doyle was, and still is, called Mama Doyle. Stories passed down say she loved books, and learned to read in a hedge school in Ireland. A hedge school meant that the schoolmaster and students hid out in the country behind the hedges where the English would not see and arrest the schoolmaster. In Holyoke Mary took in relatives right and left, including her daughter Bridget's widowed husband, Matthew Ashe, and his children. She believed in eating healthy and didn't indulge children with sweets. For cakes and candy they had to go to her sister, Catherine O'Connor.

Bridget married late--1894, and died young--1897. She lived long enough to give birth to my grandfather on April 15 1897, and then passed away on June 14 from TB, historically the world's greatest killer.

Of the 9 Doyle children, Michael was the most successful; he established a printing business called M.J. Doyle Printing Co. Over the decades he employed his brothers, his children, nieces, nephews, grand-nieces, grand-nephews, cousins, and whoever else needed work.

Some people inherit jewels or priceless artifacts from their ancestors.  Me?  I inherited this wooden ruler from my Mom who as a teenager worked for her Great-uncle Mike Doyle; I also own a few of the books he published

Tom Jr. worked in a clothing store. On a tragic day in 1913 his wife's dress caught fire from the coal stove and she died soon after. 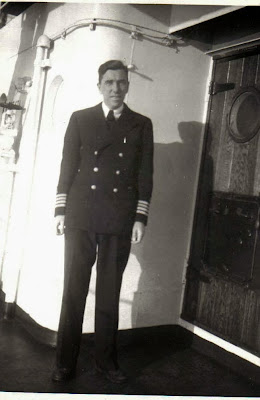 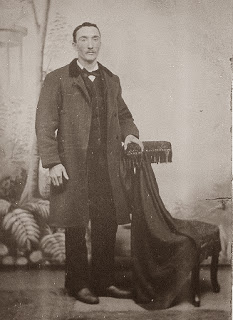 Ellen and Kate Doyle married other Irishmen in Holyoke and raised families. Kate's son John eventually took over the M.J. Doyle Printing Company. Kate is the only one of the Doyle children who lived long enough for me to know. 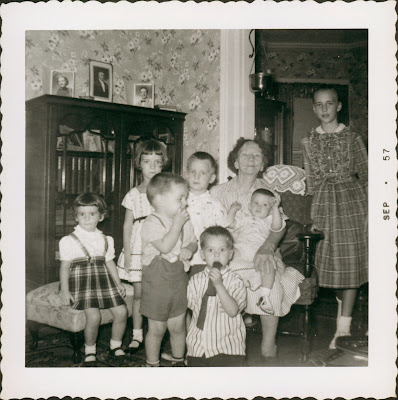 me on the left with various cousins, and my Great-great Auntie Kate Doyle Sullivan

The oldest Doyle child, Mary, had married Tom Brosnahan in Ireland before her family emigrated, and remained there for the rest of her life. About half of her children eventually settled in the US.

So there you have it. An Irish Catholic family forced out by drastic circumstances, who then made good in America. I don't believe in coincidences or accidents of history. The calamity of the Irish Famine sent faithful energetic immigrants to American shores and look what they have done. They made ours the greatest country in the world. They gave me the great gift of a home in the USA.