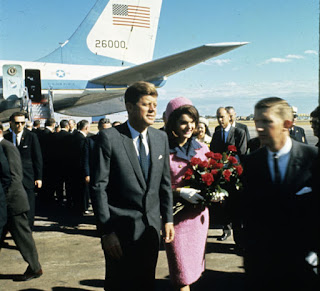 I realize everyone is on the bandwagon writing about JFK this week, this month, this year. My memories of that day have been written about here.  And here are my two cents for today.

Everyone maintains that they grew up in turbulent times. For my parents it really was a turbulent childhood, what with the Depression and then World War 2. My childhood had its storms of race riots, the nagging dread of nuclear war, the abhorred Vietnam War, Watergate, etc. My children observed the attack on 9/11 and its fallout that has colored the past decade.

But the assassination of a president is a ghastly experience for a country to endure. Thank heaven we have not gone through that again in the past 50 years. President Kennedy's aura of youth, vitality, exuberance, and vision for a stronger America infected even those who did not vote for him (like my Mom), and Jackie had something to do with that. The day of his death and days following were the nightmare that wouldn't go away. Questions remain about what really happened in Dallas on November 22 1963, questions that cannot be answered. And folks still wonder, what if?  What if he had lived to complete his term, and a second following?

And then less than 5 years later, Martin Luther King was gunned down, then 2 months after that, Robert Kennedy. Talk about turbulent times. Talk about fear of  the future  . . .

The future became the present, times improved, sank, then recovered. And sank and recovered again. Americans really are a resilient people. We want better for our children than what we have had. And despite all the horrendous times of the past and present uncertainties, I believe we've delivered.
Posted by Suzanne Bubnash at 4:30 AM