"They buried us without shroud or coffin.  And in August . . . the barley grew up out of our grave." -- Seamus Heaney 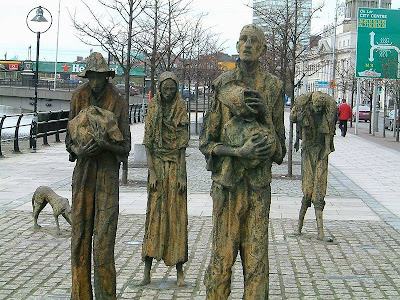 My good friend and fellow family historian, Barbara Hovorka, has said, "People did not leave home when times were good." In a historical sense she means that unemployment, lean harvests, famines, epidemics, harsh weather and military conflict were the catalysts responsible for moving individuals and the masses from one land to another. I can say the reason I'm sitting here in my sunroom in Beaverton Oregon writing this blog post is in part due to the Great Irish Famine of 1845-1850. It drove my Catholic ancestors from the emerald land they loved, to strange bustling shores where they struggled to put down roots.

The Great Famine was set in motion hundreds of years before it occurred, when England imposed itself on Ireland because it knew better than the Irish what was good for the Irish. The Irish plight escalated when the crown bestowed on its loyalists, land confiscated from the natives. Most of those English folks did not want to live in a backward primitive papist land so they became absentee landlords, entirely out of touch with the cruelty and deprivation they caused by collecting unreasonable rents on land the Irish had previously owned themselves.

In their cashless economy, the Irish strove to pay the rent with crops and small animals they raised. It was nip and tuck for them because the acreage they could afford to pay rent on was hardly enough to keep the wolf from the door. And if an Irishman improved his dwelling by building a fence or adding a window say, his rent jumped. Valuable animals, the source of rent, were kept safely inside the cottage. And then, the English expressed deep contempt for what they called a filthy lazy good-for-nothing people living in squalid conditions, conditions that the English themselves had created. Landlords had total power over their tenants--they could turn them out and clear the land for cattle with merely a word.

Bearing the cross of near-starvation was bad enough; the Irish also lived with the Penal Laws which were designed to force conversion to the Protestant Church of Ireland. Shortly, they included restrictions on Catholic ownership and inheritance of land, education, worshipping "popery," owning a horse worth more than 5 pounds, and holding public office. Penalties for breaking the laws included loss of goods and home, and at worst, the scaffold.

By the late 1700s the potato, an American transplant, was thriving in Irish soil, and the population thrived with it. Among the native peasants the potato became the central component of their diet. The island's population doubled between 1780 and 1840 to over 8 million. Then in 1845 and 5 subsequent years, the potato crop was almost wiped out by a blight, setting in motion terrible times from which Ireland has never fully recovered. And thus, the Great Famine launched a great migration.

An old Irish folk song, The Wearing of the Green, laments the barbarous yoke England laid upon them, and the English attempt to purge everything that made an Irishman Irish. The last verse admits that refuge in the USA was their only salvation:

I hear whisper of a country that lies far beyond the sea, where rich and poor stand equal in the light of freedom's day.
Oh, Erin must we leave you driven by the tyrant's hand, and seek a mother's welcome in a strange and distant land,
Where the cruel cross of England's thraldom never will be seen, and where thank God, we'll live and die . . . still wearing of the green.

see more maps
Just about half my ancestry comes from the Dingle Peninsula, which is on the lower left side of the map, the 4th peninsula up--the one colored bright red that points almost straight west.


Posted by Suzanne Bubnash at 4:30 AM