My Baby, My Compost Pile 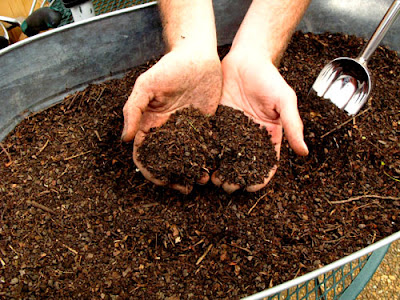 My compost pile is like a baby (without the midnight feedings!).  I tend it carefully, make sure it's fed and warm, that it has a drink now and then, that it doesn't need changing, and when the time is right--when it has proved itself to be ripe and mature--it is released to do some good (I spread it around the garden).

I started composting in Meridian Idaho--we lived there 1978-1984.   We had a half acre with 12 fruit trees, grape vines, and a very large garden.  I subscribed to Organic Gardening magazine, and read it cover to cover every month.  They often talked about this thing called composting, new to me.   I gave it a go.  Our first compost pile wasn't contained.  It was just the place we piled garden waste.  We weren't religious about putting fruit and vegetable scraps in the pile, but then, we had a 3 very small children to tend and other things to think about.

When we moved to our current home we established a garden spot and the compost pile was still only a pile for our waste, which I would turn once in a while.   I never knew there were actual containers you could use to enhance compost development, until about 25 years ago.  Metro (a local government entity) began selling Earth Machines for about $25.  I have 2.  In theory I would be adding to only one at a time while the other stewed and cooked the compost undisturbed.   But we have a huge amount of waste to add, so they both get fed until once a year--in spring--I back off feeding one of them for a month so it can finished "cooking" and be spread soon. 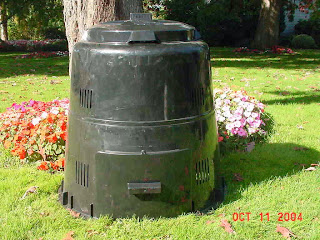 the earth machine (not my photo)

In the fall I add tons of cut up cornstalks, bean vines, pumpkins, and leaves (mulched or not) along with our regular kitchen waste and weekly grass clippings.   Kitchen waste is more bulky when we have corn cobs or grapefruit rinds, so those I quickly cut up with scissors when they go in the kitchen bowl. Any time of year I add cuttings from plants.

Successful compost requires some balancing between carbon and nitrogen.  Never put in a weeks' worth of grass clippings (nitrogen) without balance from kitchen waste and carbon brown matter.  You'll end up with a reeky mat of slimy grass.  If I'm short of brown matter such as leaves I can tear up paper bags and egg cartons or shred newspaper, and adding a shovel full of soil helps too.  If I have too much grass, some gets stirred into the compost bins and the rest spread between garden rows to keep our shoes from getting muddy.

Never add bread or meat.  Meat will attract raccoons, possums, and worse.  Bread gets gross and mushy.  No branches or heavy woody stuff or weeds.  Just about anything else goes!  I'm such a compost nerd that I have been known to bring empty plastic bags to a picnic and take home the melon rinds or other organic stuff.  I bring compostables home from my son's house.  And I have picked cores, peelings and rinds out of peoples' garbage to bring home to feed my baby,  my compost pile . . .

Composting is super satisfying for these reasons: 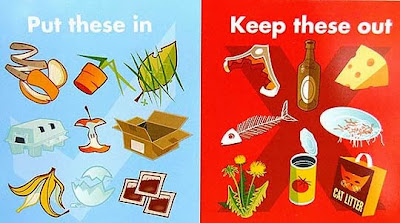