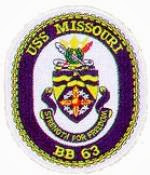 My Dad spent several years aboard the "Mighty Mo," the USS Missouri, or BB-63, during and after World War 2. My siblings and I grew up hearing the stories of the ship sailing through the Panama Canal (with only inches to spare), the big guns firing at the Battle of Okinawa, and the drama of the kamikaze starboard attack in 1945. We knew the treaty with Japan to end World War 2 in the Pacific Theater was signed on board the Missouri, on the very date my brother was born 11 years later. Dad had a scrapbook full of Missouri photos and information that I pored over again and again.

The Missouri was active in WW2, Korea, Vietnam, and the Persian Gulf War. In the mid-1980s the ship was docked up in Bremerton Washington. Early one Saturday morning my family made the 3-hour drive from Beaverton to take a ship tour. We saw the seal planted in the wooden deck marking the spot where the treaty was signed, and the spot where the kamikaze hit. I craned my neck to look at the conning tower from which Dad spied the approaching kamikaze.

In the mid-90s the decision was made to permanently mothball the battleship at Pearl Harbor near the USS Arizona. In 1998 the Missouri made a farewell voyage along the west coast of the US, stopping in various ports for a last hurrah. The day it docked in Astoria Oregon, I took Steven out of kindergarten to watch the ship cross the Columbia Bar and sail upriver to port. I expected all others would head to Astoria for a tour, and thousands did, but out there on the sandy riverbank we had company.

Dozens of folks occupied camp chairs planted on the sandy bank of the Columbia River, in the area north of Fort Stevens. The thrill of anticipation was in the air as we all awaited the big moment when the Missouri would appear and glide past us. We spotted it downriver and it approached at a decent clip. When it reached our impromptu viewing section, we all stood in tribute as the majestic ship, guns thrusting skyward, passed on its final voyage. What a memorable moment of pride and patriotism for us all.

I plan to visit the Missouri at its berth in Pearl Harbor someday.

A bit of trivia: the Missouri was selected for the signing of the treaty with Japan, because then President Harry S. Truman's home state was Missouri. 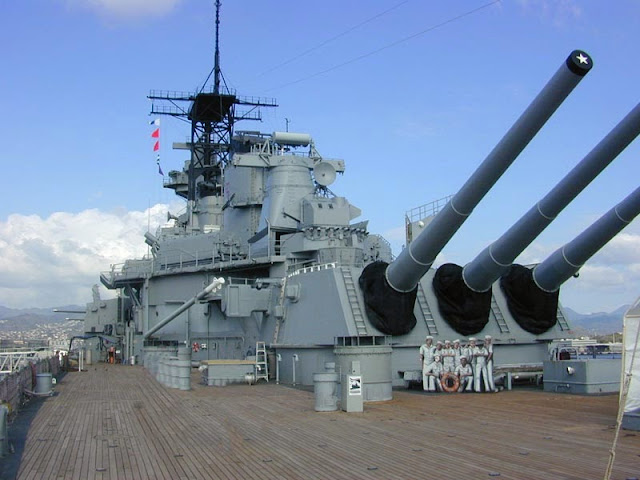 a modern view of the big guns 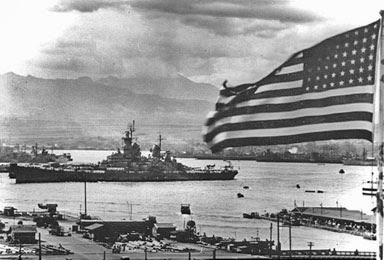 the "Mo" gliding through Pearl Harbor on its way back to New York after the war ended; Dad is on board there someplace 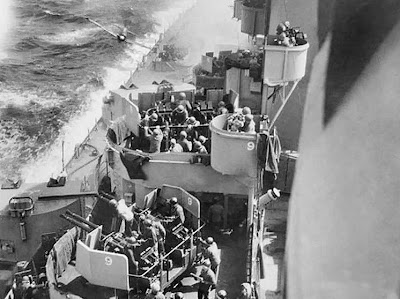 The plane is barely visible at the top of this famous photo, left of center. The Japanese Zero and the pilot's body broke apart on impact; not much damage was done to the ship and no one else was hurt.  Captain Callaghan ordered a military funeral for the pilot. A Japanese flag was made up, and a rifle salute was given as the body was buried at sea. Dad said that not everyone on ship agreed with Captain Callahan's decision to give a military funeral to the enemy. Dad felt the Japanese teenager deserved the respect given. "He was a human being," Dad said. 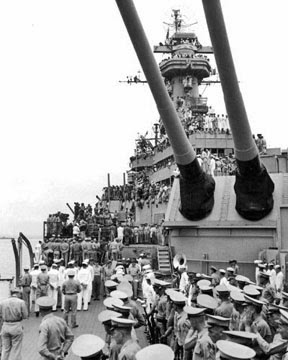 I believe this is a view of the treaty signing 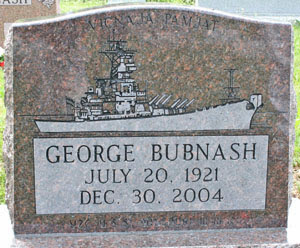