This One's For You George (or, The Exploding Whale) 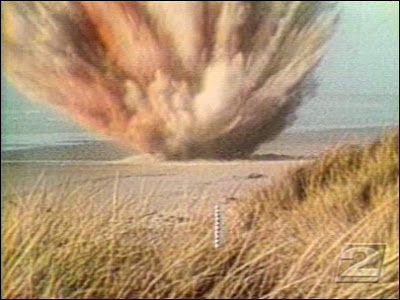 Last Sunday a well-known Oregonian passed away. If I mentioned his name you would not recognize it, because his fame did not make himself a household name. But if I tell you what he did, you will laugh and nod your head and say pitifully, "oh yeah--that poor guy."


I'm referring to the 1970 Adventure of the Exploding Whale. And George Thornton was the man responsible. George was 84 at his death last week. In 1970 he was an Oregon Department of Transportation [ODOT] highway engineer, who was in the wrong place at the wrong time. Because all of his associates had conveniently ditched town for deer-hunting season, you could say he drew the short straw. And this straw was downright stunted. George was given the job of removing a deceased 8-ton beached sperm whale from the lovely south coast town of Florence Oregon.

You are probably wondering why an ODOT highway engineer, of all people, was given the job of removing a dead whale from a public beach. Back in 1913 Oregon beaches were declared to be state highways, that's why.

The beached whale was a tourist curiosity for about 2.5 days. Then it deteriorated into a rancid reeky rotting carcass, so ol' George was called in to take charge. The carcass could not be buried, for the tides would uncover it. . . could not be dragged to sea as it was already decaying. . . could not be burned because yikes, can you imagine the aroma of burning rancid whale?

But never fear, for George had a great idea--dynamite the thing! It would take only a half ton of explosives to do the job. And once the carcass was blown to smithereens, the seagulls, crabs and other hungry sea scavengers would dispose of the leftovers in no time. Problem solved . . . mmmmm.

November 12 1970 was the big day. Spectators were kept at a quarter-mile distance on the surrounding dunes when the plunger was pushed. I won't say too much more because this video tells it all. Let's just say that the ODOT crew, the spectators, and the news media went home that day plastered with foul, putrid bits of dead whale all over their clothes. And one spectator struggled to explain to his insurance company why he  needed a new car. When humor writer Dave Barry first heard this story in 1990, he said it was the funniest story he had ever heard (and he hears lots of funny stuff).

Poor beleaguered George Thornton never lived down the incident. Every November on the anniversary somebody from somewhere contacted him for comment, and he could only say that his method was effective and the media ruined his life, basically.  May you rest in blissful peace, George.

A couple of related links:


Posted by Suzanne Bubnash at 3:00 AM