The Last Frontier: Inside Passage

After Daniel's hospital adventure we flew to Juneau for 10 days of cruising Alaska's Inside Passage on their state ferry system. On that marine adventure we stopped at well-known sites such as Sitka and Skagway, and the lesser known towns Wrangell, Hoonah, Angoon. We changed ferry boats at various ports. Some were roomier and more comfortable than others. We saw whales and porpoises leaping from the sea next to our boat. Ferry names I remember are the Taku, the Malaspina, the Columbia, the Matanuska, and the Le Conte. Yeah, the LeConte. It's the one I remember best and  I'll get to that below. 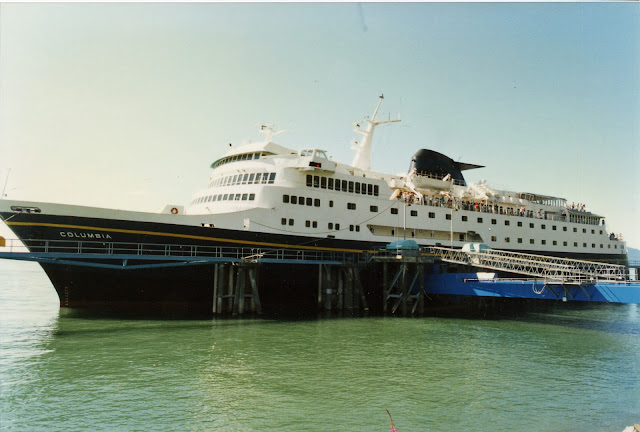 the Columbia, one of Alaska's ferries

Sitka's Russian roots goes to show that you don't have to go all the way to St. Petersburg to see onion-domed churches, 3-barred crosses, and gorgeous icons. 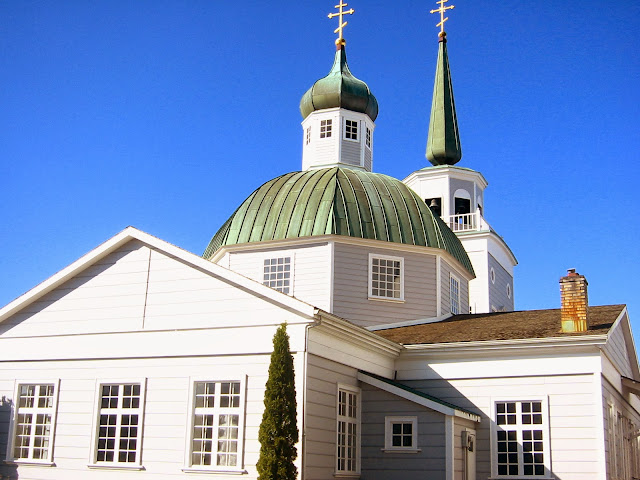 
Tlingits were the original inhabitants.

Skagway's claim to fame is its history as the jumping-off place for prospectors looking to strike it rich in the 1897-98 Klondike gold rush. The town is a re-creation of that era, with frontier-style false-front buildings, gambling parlors, and even dramatic productions portraying the bawdiness of the era. The 100,000 Klondikers were required by the Canadian government to bring 1 years' worth of food to ward off starvation, and they had to transport it all up the Chilkoot Pass. By themselves. And then dig for ore in the permafrost.

The down side and fright of our Skagway stay was that Daniel was reacting to an overdose of the seizure medicine prescribed in Anchorage. We didn't know why he was so groggy and confused, but on calling his doc in Portland, we figured it out, and switched him to the right dose. He doesn't have much memory of Skagway. Except for winning $300,000 in fake money at the Skagway gambling parlor! 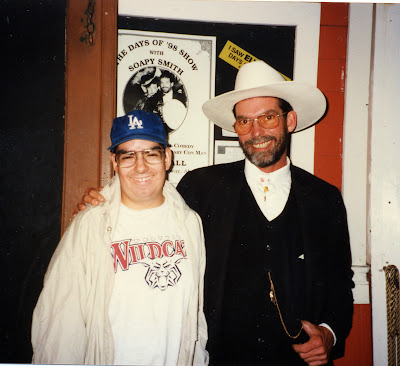 At one port where we docked (Hoonah or Angoon) for just quick stop I decided to take a walk in the sun for a half hour. I hadn't got an eighth mile from the ferry when a passing SUV slowed, rolled down the window and a woman said, "ma'am, there's grizzly bears walking around here--did you know that?"  No I did not. I made an about-face and a beeline back to the boat.

what beautiful creatures--from afar  (not my photo)

The SS Le Conte. 4-year-old Steven enjoyed running around the decks of the ferry boats.  One of us would go on the deck with him to keep tabs on his whereabouts. On the LeConte, he ran fast down the side towards the bow, aiming for the point of the bow where he could look out onto the ocean. Neither of us saw the skinny cotton rope stretched across the bow to keep people 10 feet away from the point. Steven hit the rope at full speed across his neck, and was ricocheted backwards, slamming the back of his head on the deck. His neck could have snapped, he could have had a concussion. The horror of what just happened almost immobilized me. The captain had seen the whole thing from the bridge and sent an officer down to bring us up. Steven was ok, just startled and sore. The captain apologized profusely and had us stay on the bridge for a while. He gave Steven a navy corduroy cap with SS LeConte stitched in gold. He let Steven steer the boat. As we approached port Steven is the one who blew the horn announcing our arrival. The captain did everything he could to forestall a lawsuit. I insisted that if the bow had to be roped off that he tie on some red ribbons so this would not happen again.

Highlights of the Inside Passage 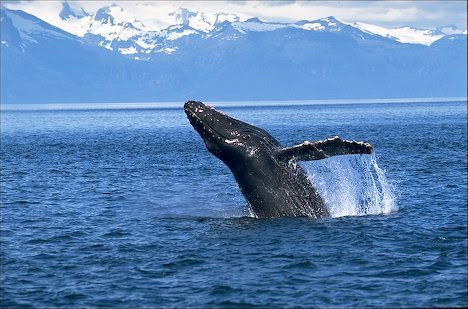 a breaching whale in Alaska's waters (not my photo)

Alaska's Flag is undoubtedly one of the best state songs:

Eight stars of gold on a field of blue,
Alaska's flag.  May it mean to you
The blue of the sea, the evening sky,
The mountain lakes, and the flow'rs nearby;
The gold of the early sourdough's dreams,
The precious gold of the hills and streams;
The brilliant stars in the northern sky,
The Bear, the Dipper, and shining high,
The great North Star with its steady light,
O'er land and sea a beacon bright.
Alaska's flag to Alaskans dear . . .
The simple flag of the last frontier.
Posted by Suzanne Bubnash at 4:30 AM