3 Terrible Days in May 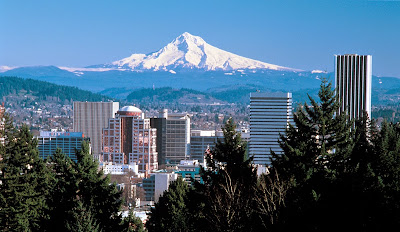 At this time of year in NW Oregon one or more news websites always posts a tidbit about what is known around here as "The OES Disaster."  It was an agonizing three days in May 1986, with a horrific outcome that devastated the families involved and cast a weighty pall over the community.  And it changed forever the way I look at Mt. Hood.

Mt. Hood is one of many volcanoes in the Cascade Mountain Range that spans from Canada south into California.  Its 11,000-foot pointy white cone creates a stunning backdrop for the city of Portland, and is a destination for recreation in every season.   Mt. Hood has a flip side.  It's a menacing place of yawning crevasses, wild glacial rivers, deep snow, crushing avalanches, and extreme weather generated by the mountain itself.

OES stands for Oregon Episcopal School, a private institution in Portland that annually gave some of its students an opportunity to climb Mt. Hood.  The 1986 group of 10 students and 2 teachers was caught in a severe blizzard on the mountain.   The climbers were floundering but did not turn back in time to make it to safety before the gale-force winds and zero visibility shut their window of opportunity.   Fatigue and hypothermia were blamed for the calamitous poor decisions made by the faculty leader that day.

At mid-morning the next day, one student and the climbing guide were able to get down the mountain to alert authorities that the others were hunkered down in a snow cave.  Search and rescue teams mobilized and the families of the climbers gathered at Timberline Lodge which is at the 6000 foot level on Mt. Hood's southern slope.  By this time, all of Portland was glued to the TV coverage of the missing party, and I'm sure a multitude of prayers for the climbers were offered by total strangers for these kids lost in the storm.

Searchers combed the mountain in perilous conditions and a few were injured in their quest to locate the missing.  Visibility was nil and blowing snow made it difficult to move or handle equipment.  On the third day the frozen bodies of three of the climbers were found sprawled in the snow, and tragic as that was, it gave rescuers a clue that the snow cave might be close by.  Five feet of new snow obscured any evidence of where that could be, so rescuers spread across the flank of the mountain to probe the snow with long poles in what some thought was a futile exercise.

It worked.  Eight bodies were found stacked like cord wood in the tiny snow cave.  They had no sleeping bags, no stove, and wore inadequate clothing for the conditions.  All were airlifted to various area hospitals.  Only two would survive and they were basically brought back from the dead.  One of them lost his legs. 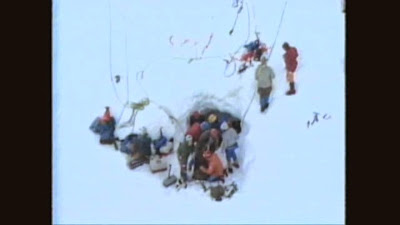 In the aftermath recriminations flew from every quarter directed toward the school that allowed such an inexperienced and ill-prepared group to attempt a serious and perilous climb of Oregon's highest peak.  The parents may as well have been stabbed in the heart, for the pain they felt.  The bitter father of one of the deceased did not allow himself to look at Mt. Hood, and eventually moved far away to put it out of sight.  But it was probably never out of mind.

Locater beacons were designed and made available for checkout by summit-bound climbers.  Outdoor-lovers such as myself realized that even a day-hike in the wilderness could lead to a bad situation, and began to hike and camp with better equipment and more complete supplies.

This video is made of original footage from that dreadful three-day ordeal.  It is eerie to see the concerned optimism displayed by officials in the first part, knowing now that the worst possible outcome was just around the bend.

Posted by Suzanne Bubnash at 12:01 PM