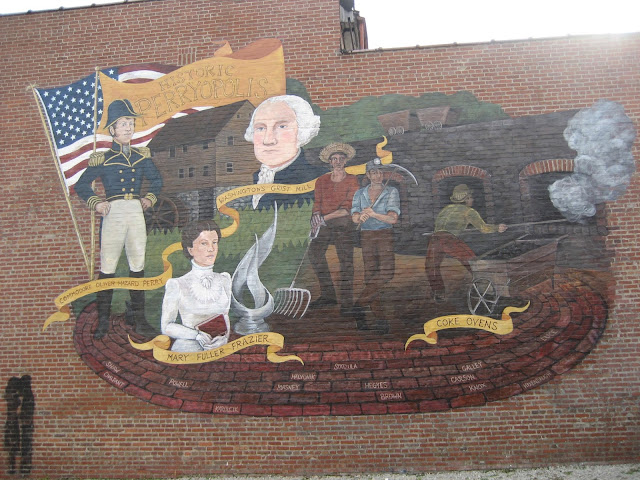 This mural is painted on the wall of a commercial building in my Dad's hometown of Perryopolis Pennsylvania.  It pretty much sums up the diverse history of this small town that few have ever heard of.

Hundreds of years ago Western Pennsylvania was a remote wilderness peopled by Indian tribes.  During the French and Indian War, George Washington was stationed at Fort Necessity, about 20 miles down the road from the future site of Perrypolis.  He was so taken by the fertile land that he bought 1600 acres in the area about 1770.  You can see venerable George's familiar portrait in the mural.

Just to the left of George is a structure called Washington's Mill.  Construction was finished in the mid-1770s.   Washington never lived in the area, and he eventually leased out the land and mill.  When Dad was young the mill was in ruins, though still mostly standing.   In my childhood memory the mill was a total ruin.  I remember playing in the creek that once turned the mill-wheel.  20 years ago Amish carpenters were brought in to rebuild the mill, but not to be used for grinding grain, of course.  It is now a fascinating tourist site.

To the left of the mill you see Oliver Hazard Perry, a victorious naval officer active in the War of 1812.  His surname was selected as a name for Perryopolis when the town was laid out in 1814.

The woman in the mural is Mary Fuller Frazier who was born in Perryopolis.   When her will was read in 1948 Perry was shocked and thrilled to find out that she left $1.5 million to the town.  I have asked my relatives what the money has been used for.  As I understand it, the capital remains untouched, and the investment pays for utilities a citizen would ordinarily be billed for--street lights, water, sewer, etc.  Perhaps some of it was put into civic improvements long ago.  The school district was renamed in honor of this generous woman.

On the right of the mural are the famous coke ovens that once burned so brightly that you could read a newspaper by their glow, when inside your house at night.  Coal was reduced to coke in these ovens, and coke is what powered the great steel mills of Pennsylvania and Ohio.  There were once about a thousand coke ovens lined up in a row along the tracks that bore the coal cars.  Coal cars were able to dump their load right into the ovens.  During hard times such as the Depression, a few homeless families occupied unused coke ovens.

A unique outstanding feature of Perryopolis is the layout--it is a wheel with 8 spokes leading out from the center, and is called The Diamond.   In the photo below if you focus on the dark traffic circle in the upper right quadrant, you'll see the 8 roads heading out in every direction from that center point. 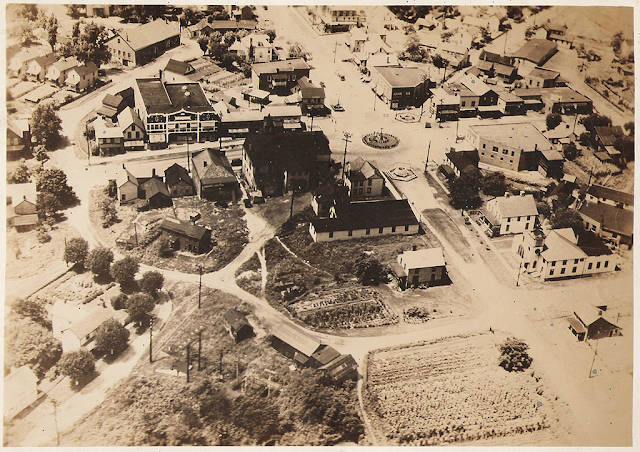 Here is another view of the layout.  Note the names of the streets.  They all pertain to the theme of colonial American history. 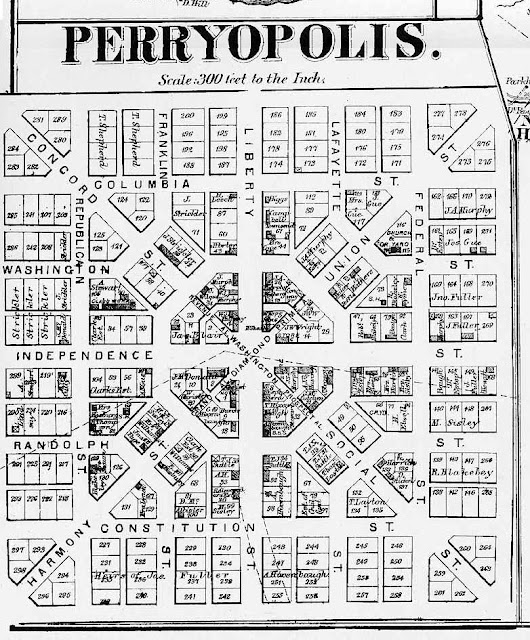