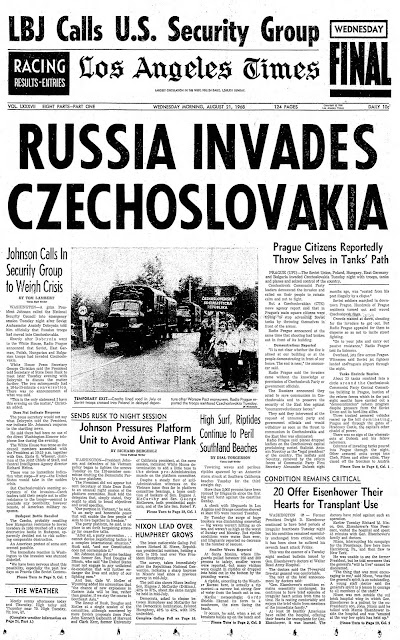 Dad scooped the Los Angeles Times off our driveway every morning at 5:30. He and Mom usually had it read by the time the rest of us rolled out of bed. This day, August 21, 1968, was different though. We were all up by 5 a.m. preparing to attend cousin Charlie's funeral an hour south in Long Beach, California. Dear Charlie died on the 18th of August after several years of tragic decline due to ALS. He was Mom's first cousin. My angelic father had been the catalyst for getting our family down to visit Charlie almost every Sunday after church, despite the long drive to the nursing home in Long Beach, and later Fullerton, California.

We woke up to the above headline that August Wednesday, the 21st. Our eyes were sleepy, and that front page glared at us from the kitchen table as we ate our rolls and juice, putting a weighty damper on an already melancholy morning. The huge, bold type implies that Times readers should be and would be deeply interested in this invasion and its consequences, and maybe they were. Our arch-enemy, Russia, had gone rogue again. I suspect that not many folks actually cared about Czechoslovakia, which wasn't exactly on the radar of the average American. Except for us, that is.

Dad's parents had immigrated to the US from the Austro-Hungarian Empire, now the Czechoslovakia of the bold headline, in the early 1900s. Over the decades what with a depression and two world wars, pinching poverty, Grandpa's long hours in the coal mines, the births of eight children, and then Grandpa's crippling mine accident in 1951, they never, ever entertained the thought of going back to the old country for a visit.

Sometime after Grandpa's death in late 1966, we had word that Baba was considering a visit home. Though her parents and siblings were deceased, she had nieces and nephews who were living, a few of whom corresponded with her. The 'Prague Spring' was warming. Why she did not just pick up and go is unknown. But on August 21, 1968, the opportunity vanished. I wonder now if she would have been trapped behind the Iron Curtain had she been caught in the invasion.

Then followed several decades of silence from her family in Czechoslovakia. I remember the significance of the first letter she received from her cousin Michael Ihnat-Mikula in the mid 1980s. The political climate was relaxing a bit, and he was able to reestablish contact.

After European communism tumbled, Slovakia became independent. In 1997 I traveled to  meet my Slovak family for the first time. A large group of cousins gathered at a home in Humenne to meet me. We discussed their lives and events of the past. The oldest person there was Irina Porochnava Bubnasova. I brought up the Russian invasion of 1968, and wasn't prepared for a wrenching emotional response.

Irina gravely recounted the grief and dread and terror of that August morning. Every woman who had endured World War Two was hysterical. Russian tanks crowned the hills around town with guns pointing towards homes, at these women, at their children. It was the world war all over again.

The vision of Russian soldiers seizing the town, and the women of Humenne reliving erstwhile terrors in their minds, brought forth tears. I couldn't and wouldn't ask Irina about the terrors, but am pretty sure that the same horrors of war going on today in Syria or Iraq are what went on then. My comfortable American self can feel sympathy but can never fully fathom the abominations of war.

Though the 1968 invasion stifled the wave of freedom behind the Iron Curtain, the Russian army didn't occupy long. Life in Humenne and the country returned to normal, albeit a harsher version of it. Less than 25 years later the Soviet yoke was thrown off, and my family there now lives in light and prosperity and freedom. 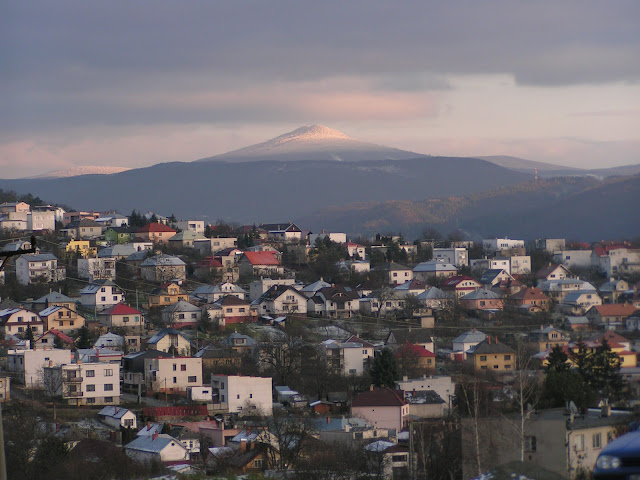 City of Humenne
My grandfather was born in a village located on the upper slopes of Vihorlat, the mountain in the background 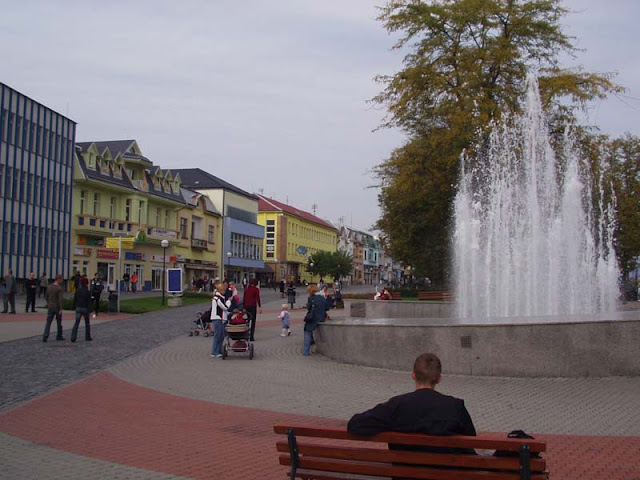