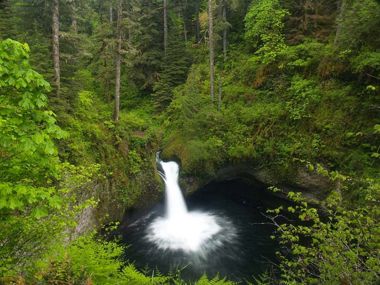 Punch Bowl Falls
from www.oregonhikers.org
Our famed Columbia Gorge, a magnet for hikers, climbers, sailors, swimmers, skiers and sightseers, transformed this fall from a mecca to a monster in one short afternoon. Over Labor Day weekend, a foolish, careless group of teens threw a firecracker into the parched forest near Punch Bowl Falls (pictured above) on the Eagle Creek Trail, causing an explosion of flame that consumed  50,000 acres in the beloved Gorge.

The fire burned for six weeks. Even 30 miles away here in Beaverton, we choked on smoke. Only the first rainfall of the season put a damper on the spread of the flames, despite the efforts of hundreds of firefighters working like crazy with tons of equipment. Interstate 84 was closed for three weeks; the river was closed; towns were evacuated. The fire burned to the highway and jumped the wide Columbia River into Washington. After the fire, thousands of trees in danger of toppling were removed. Special teams climbed the burned-over slopes to dislodge rocks that no longer had vegetation to hold them in place. Mudslides are expected once the rainy season gets going. Firefighters miraculously saved the iconic CCC structures, including Multnomah Falls Lodge.

Flames spread so rapidly that 150 waterfall enthusiasts at Punch Bowl could not hike down to the trail head that afternoon. Dressed in skimpy summer clothing and even flip-flops, and without much food or supplies, they were ill-prepared for the ordeal of spending a cold night on the trail. The following day the group hiked 12 miles and a grueling 3500 feet up the mountain (through flaming embers) to where the Forest Service could transport them back to their cars.

Last week I drove through the Gorge and saw the devastation. Stands of healthy forest blend in with swaths of brown trees and blackened spars, tunnels are burned out, roadside railings are smashed from fallen trees. "Thanks" to the fire burning off vegetation, it's easier now to catch a glimpse of majestic Multnomah Falls from behind the wheel of a speeding car.

Before and after photographs: 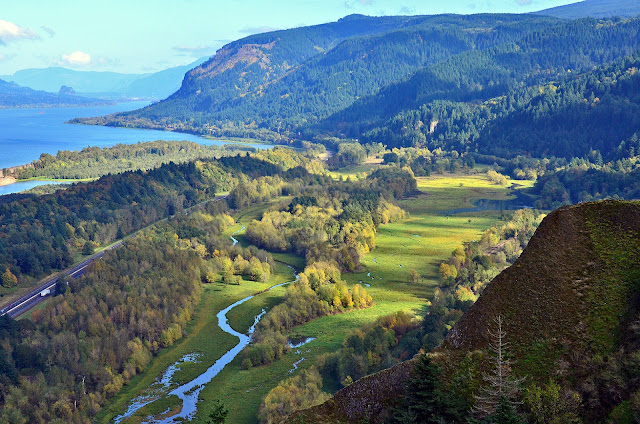 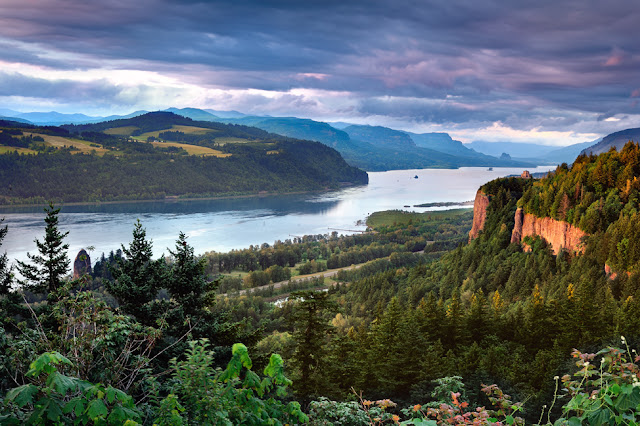 Crown Point on the right 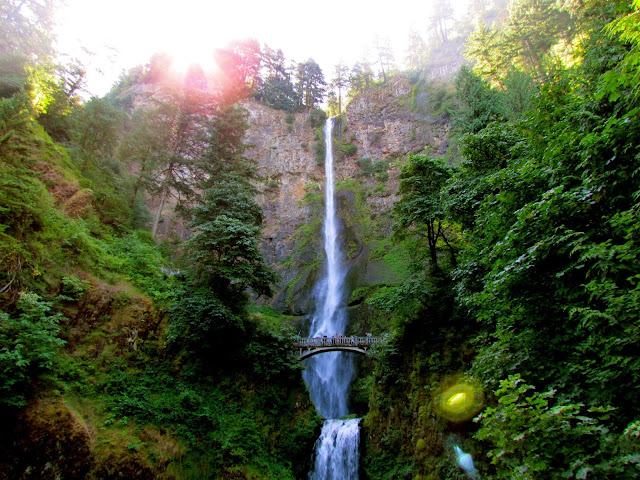 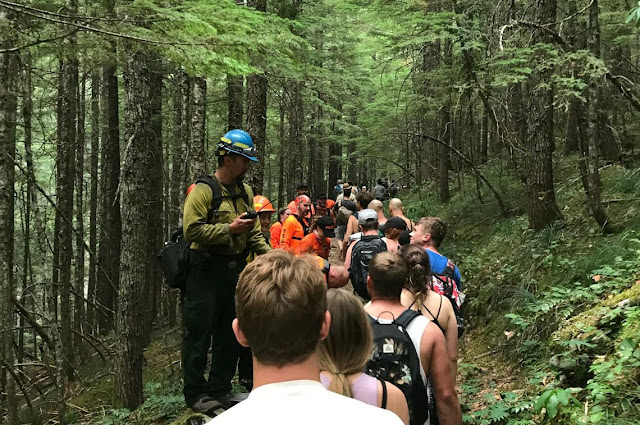 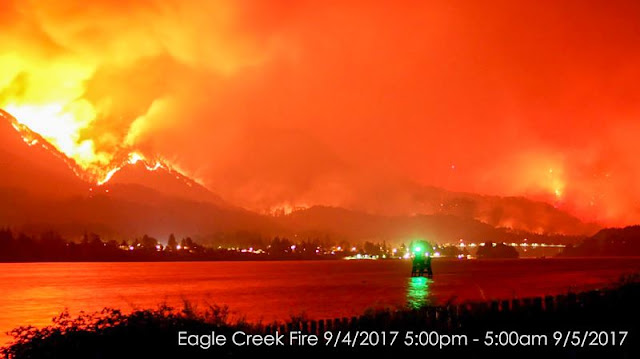 from the Washington side of the Gorge
(Portland Tribune) 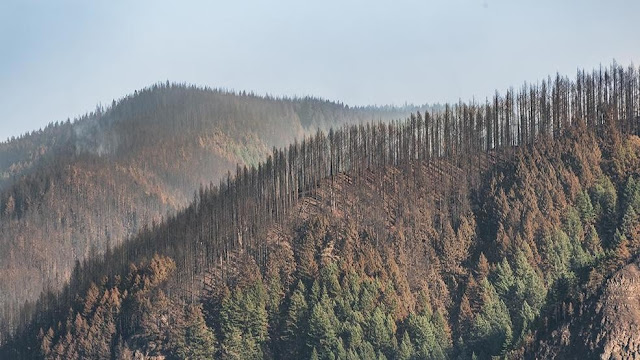 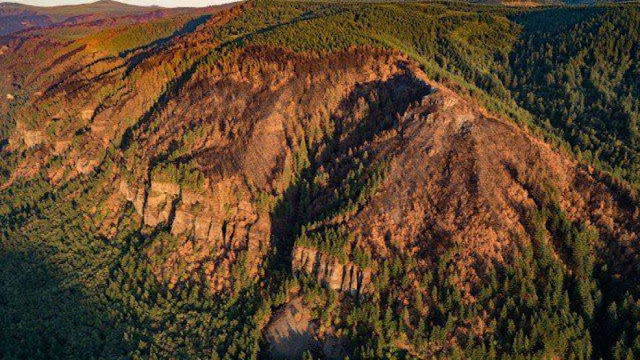 I'm pretty sure that knob on the right is Angel's Rest, which is one marvelous hiking destination; from that point you can see downtown Portland on a clear day 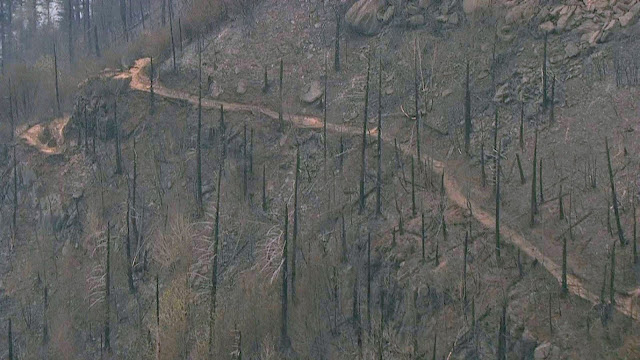 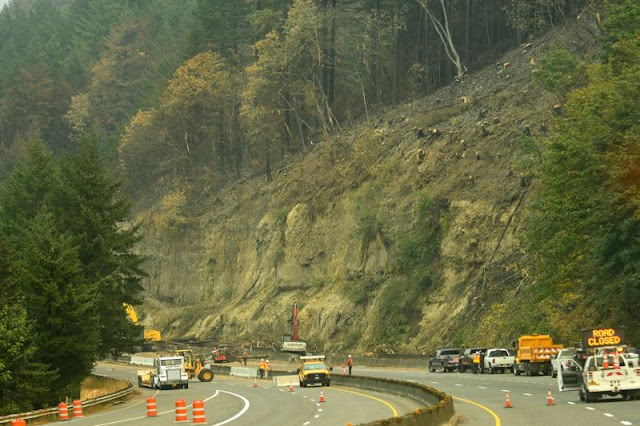 highway crews using the interstate as a work area; note stumps on hill 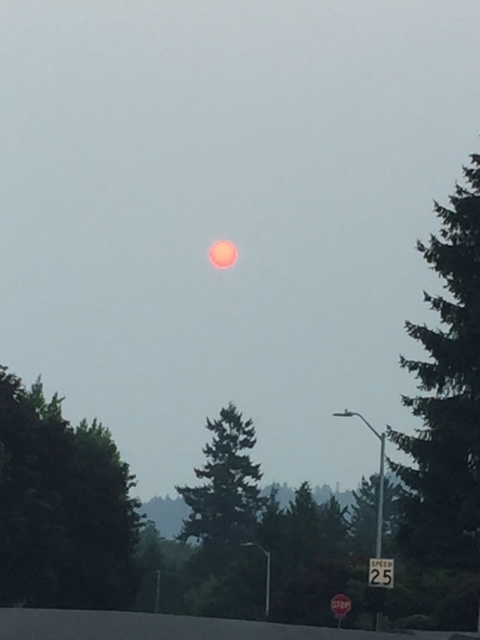 what the sun looked like from our home during the fires