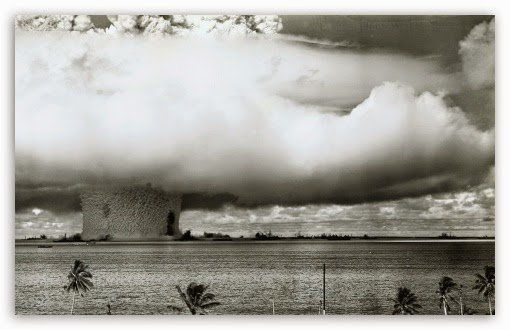 There's this protest song that was written and recorded in 1966 that was played on the radio all the time then, a pessimistic song about world conditions and where we the people were collectively heading--to total destruction, and possible annihilation.  The song is titled Eve of Destruction and can be heard here.

A sampling of lyrics: The Eastern world, it is exploding, violence flaring, bullets loading.  You're old enough to kill, but not for voting, you don't believe in war, but what's that gun you're toting, and even the Jordan River has bodies floating . . . . we're on the eve of destruction.

Yikes, depressing as it is, I got to thinking about two things.  First, what was happening in 1965-66 that caused someone to write such a song.  And second, could the words of the song be extended to today's world conditions?

Over a short four years in the 1960s, our country experienced near-nuclear war with the Soviet Union, the assassination of a president, escalation of the Vietnam War that was killing hundreds of Americans a month (over 6000 in 1966), Civil Rights marches that turned violent (Selma Alabama for one), and race riots around the country, the worst being the Watts Riots in Los Angeles.   The Communist threat was so real that you made sure your neighbors had no reason to question your loyalties.  Suspicion and dread were dumped into our living rooms every night by Walter Cronkite.

Given all of that, the song did fit the times.  I would like to say that we regular people went about our business without a worry, but that isn't true.  During the Cuban Missile Crisis of 1962 schools held air raid drills regularly, and when it looked like bombs were about to fly, we children were told that if that happened, school would be closed and we were to go straight home.  The Watts Riots spread to a community close to our home and I laid in bed some nights afraid it would come to our neighborhood.  A neighbor of ours traveled on business to Soviet Moscow, and wasn't heard from again for a time.  No one knew if he was dead or alive. 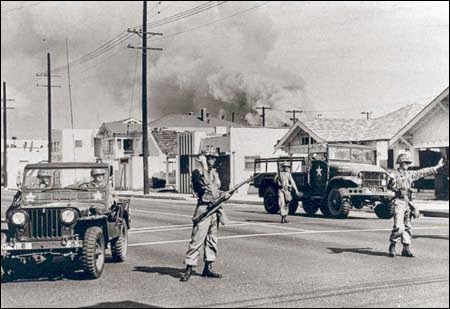 Count forward another half dozen years and we saw 11,000, then 16,000 Americans a year killed in Vietnam.  A Civil Rights leader was assassinated, then a presidential candidate.  College students staged violent demonstrations on campuses around the country.  Another presidential candidate was shot and paralyzed.  An American Vice-President, and then a President, resigned.  Peacetime inflation hit 11%.

What about now?   Since the mid-1960s positive events have happened.  The startling fall of Communism is at the top of the list.  We have a much better relationship with China than we did in the 60s.  Race relations have come a long way; a black American president is proof.  Human rights are more respected than ever.  Women have equal opportunities.

On the negative side, now we have ISIS and other scary extremists and our government works hard to prevent another 9/11.  Syria faces complete destruction.   A handful of unstable countries have nuclear weapons.  New life-threatening diseases have sprung up.  Women and girls have the most to lose in a war-torn country.  But a big difference between then (1960s) and now, is that regular people like us go about our business without direct threats from the above.  We live normal lives despite the whirlwinds spinning around us.

One thing mentioned in the song that hasn't changed: the Jordan River metaphorically still has bodies floating.