For over 40 years I have been researching my family lines, and have built up a teeming data base of personal information, vital records, newspaper articles, photographs and so on, of people connected to us.  But I sort of neglected the line of my great-grandmother's brother, M.J. Doyle.  Some distant relatives of mine told me he had descendants, but no one seemed to have actually met them or knew anything about them.  Typically I would dive right in to solve a mystery like that, but this one fell by the wayside.

Last winter I wrote a series of 3 blog posts (here, here, and here) on the Irish famine and its aftermath, including the story of one of my families--the Doyles who immigrated to Massachusetts in 1880.  There were 11 Doyles all together.  The eldest child, Mary, remained in Ireland, and 2 of the older daughters, Bridget and Nell, had come earlier to work in the Holyoke cotton and paper mills to earn ship passage for the others.  The parents and the youngest 6 of the children landed in New York on May 10, 1880.

In the spring of 2014, a woman in a small Massachusetts town was searching for her extended family.  She had lived her entire life in the same town, and had known of maybe a couple of cousins growing up, but otherwise was in the dark about any further extended family.  She knew her grandfather's large family had settled in the US over 100 years ago, and wondered how they could have so few descendants.  There must be family out there, but her searches never turned up even a scrap of information.

One day last June she sat down at her computer to look again, and this time narrowed the search by typing in only the title of her grandfather's successful business.  Among the results was the third of my blog posts mentioned above, and she began to read.  She came to this photo which she had never seen before: 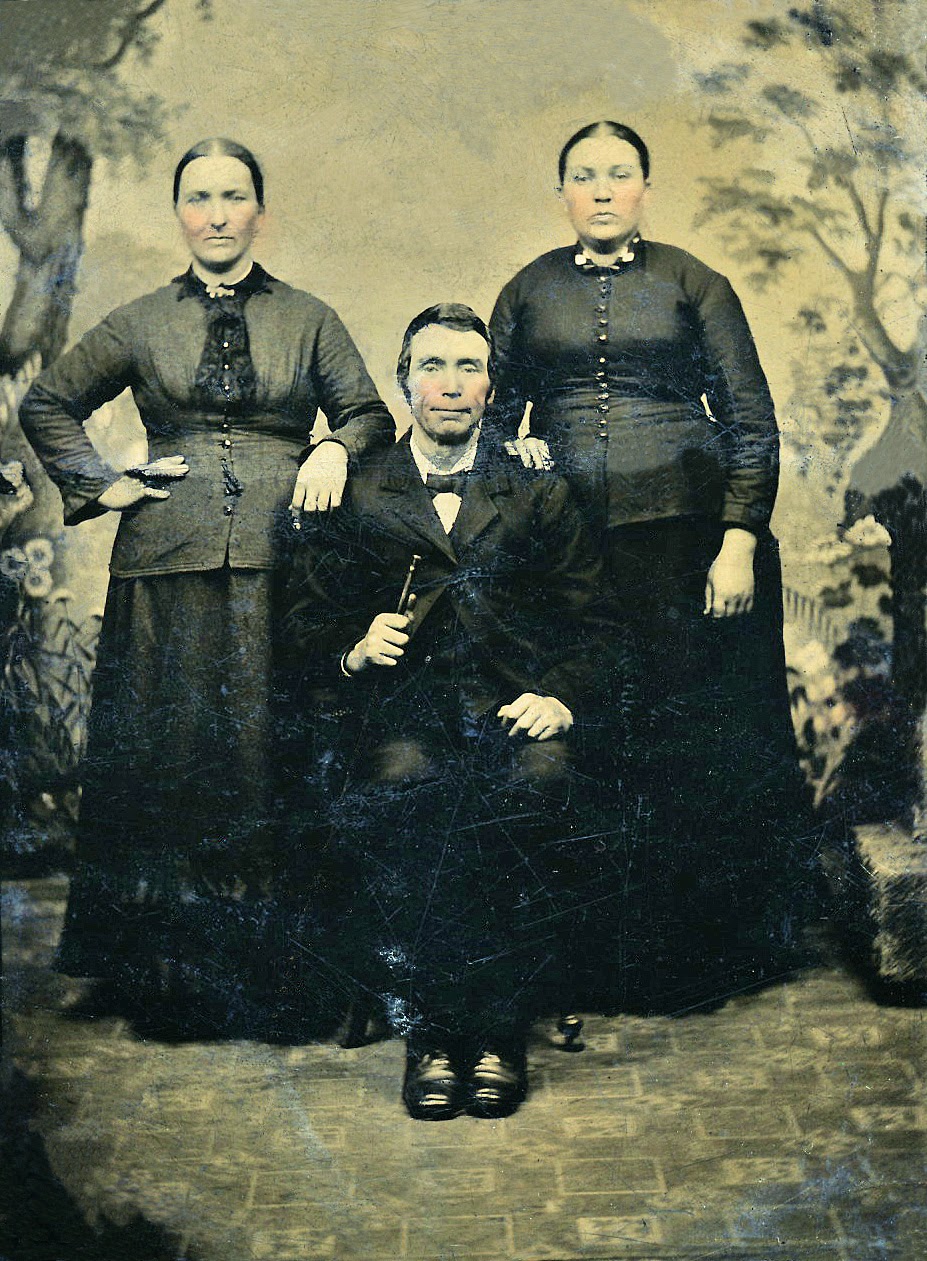 And then she read the caption I had written: My great-great grandparents Tom Doyle and Mary Murphy, along with Mary's sister Catherine Murphy O'Connor (on the right); Tom is holding a shillelagh, an Irishman's walking stick.

She recognized the names Thomas Doyle and Mary Murphy as the names of her great-grandparents.  Her heart beating faster, she continued to read:

"Of the 9 Doyle children, Michael was the most successful; he established a printing business called M.J. Doyle Printing Co.  Over the decades he employed his brothers, his children, nieces, nephews, grand-nieces, grand-nephews, cousins, and whoever else needed work."

Her grandfather, Michael!  M.J. Doyle.  Michael's printing company.  Her life would never be the same.

After weepily calling all her friends proclaiming "I've found my family!!!,"  Laurie got in touch with me.  And since then we have talked and emailed countless times.  We are second cousins once removed.  There are uncanny similarities in our lives. We have worked on solving the mystery of what happened to the printing company, and how it has affected future generations.  We're on the hunt for a few "lost" cousins.

One of the first questions I asked Laurie after hearing the story of her quest, was, "You mean, you don't know the Mulvaneys or the Griffins?"   No.  "You don't know the Sullivans?"  No.  "How about the Nelligans?"   No.  She is surrounded by dozens of cousins and had never heard of a single one.  She has since met and spoken on the phone with a good bunch of relatives.  They have been nearby her whole life, practically in her backyard.

Meeting a descendant of M.J. Doyle has been a boon to me.  It has given me a chance to say what needs to be said about M.J.: whatever his struggles or mistakes, he kept the entire Doyle family afloat during hard times by involving them in his business.  He could have hired experts in the printing field, but he hired family.  He hired my great-grandfather Matthew Ashe, when he was out of work or too ill to work elsewhere.  He hired my grandfather James Ashe during periods of unemployment.  M.J. hired my Mom and her brother for summer work. He hired his siblings, his nieces, nephews, cousins, and so on.  Thanks many times over to M.J. Doyle for providing for his huge extended family.  His descendants can be proud to be connected to such a man, while the rest of us are deeply grateful to him for his care and concern.